Supercar branding confusion at Multiplay i42 – AMD or nVidia?

Since the launch of DirectX 11 at the back end of 2009, AMD has been synonymous with triple screen gaming action. You can see how our hero driver was confused when he got into a £28,000 super-gaming-car at Multiplay i42 and found 2 sets of branding. Which was real?

Driving games have been popular for decades. For those whose happiest memories centred on the original Lego Racers, you’re in for a bit of a shock when you see how far the genre has moved past the WASD days.

This unit was positively impressive. At £28,000 delivered to your cramped studio flat in the suburbs [Right said Fred! – Ed] – it will be enough to make you the most popular kid/adult/pensioner on the block. In the interests of balance and reasonability, KitGuru needs to point out that, for the same money, you could also purchase a 20 year old Ferrari.

.
The in-car gaming action looks fast and furious – with pro-gamers queuing all day long to try and nail the fastest time in a Dirt competition. We first arrived during set-up, so this all-action shot is competely simulated. We’re assured that the emotional look of joy/excitement on the driver’s face is an accurate depiction of what you will be feeling.

.
CONTROVERSY
OK, enough of the cool pics and in-car-in-game experience – the single biggest attraction for KitGuru was the following photo. The system was booting up and, clearly on screen, showed an AMD logo. Yet, to the side, nVidia seemed to be claiming ownership/creation of the £28,000 super car. The driver also looked at both logos and seemed confused.

.
Either way, we’re jealous. Sure, the white knuckle ride available from a real £28,000 car would be more, well, real – but everyone has a car. Owning a £28,000 gaming uber-rig in your own living room would mark you out, among friends, foes and family, as ‘someone who is really serious about all this 3D malarky’.

KitGuru says: Could this be the shape of things to come? Remember the first real joysticks – modelled on those installed in famous planes? You could spent hundreds and hundreds of pounds on that kind of set up. Now they are significantly cheaper. Maybe Toyota will come up with a kit that lets you use the seat out of an old MR2 and no one knows the difference. 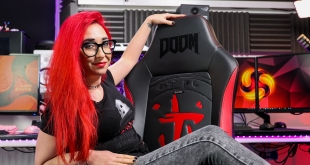 If you love Doom, then this is the chair for you!