MonsterLabo showcases impressive passive cooling while gaming with ‘The Beast’

Last year, MonsterLabo officially announced ‘The Beast', a powerful, fanless PC case with 6 kilograms of heatsinks capable of cooling 400 watts passively. Ahead of the launch, MonsterLabo has given us a good idea of what performance to expect while gaming, with the latest video detailing performance and temperatures while playing Microsoft Flight Simulator – one of the most demanding PC games currently available.

As we saw with MonsterLabo's first passive cooling PC case, aptly named ‘The First', The Beast is designed around its cooling solution, with the front and back panels directly connected to the massive CPU and GPU heatsinks, spreading the heat further over 6mm thick aluminium. The heatsinks themselves weigh 3 kg each, with twenty 6mm heat pipes running through – ten for each chip. From there, we have six copper thermal drains connecting the heatsinks to the case's front and back panels.

So what results should you expect from a gaming system built with The Beast? The video above showcases a build using an AMD Ryzen 3800X and an Nvidia GeForce RTX 3080 with no fans at all running Microsoft Flight Simulator (2020) at 3440×1440, which as we learned last year, is one of the most demanding modern games available on PC at the moment. 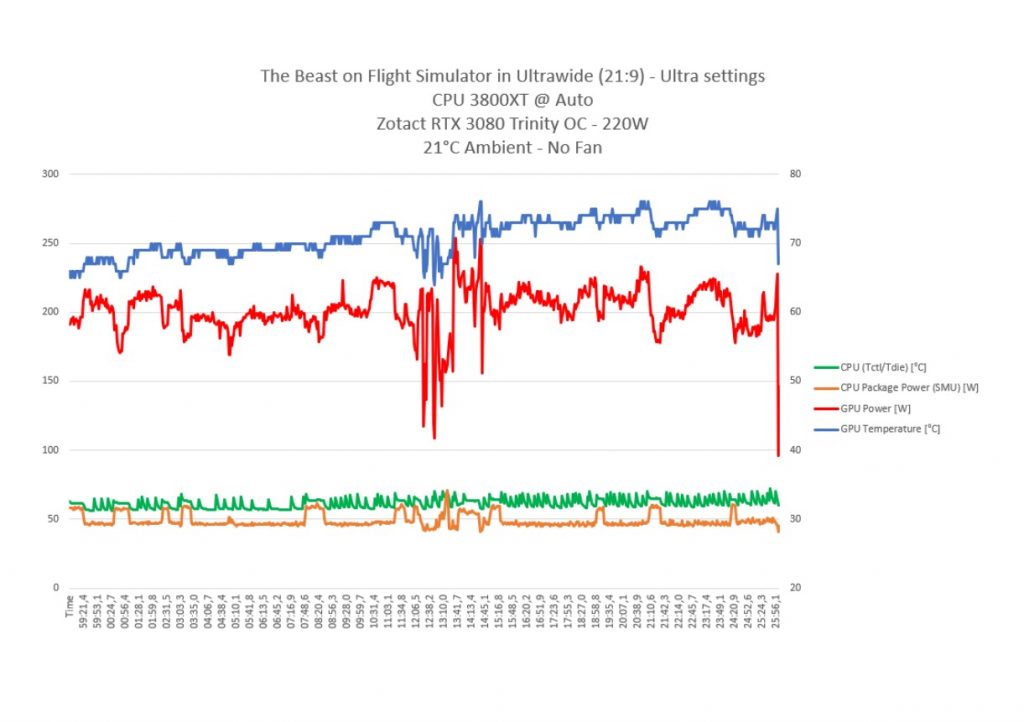 Impressively with all of this in place, The Beast is able to maintain stable temperatures throughout gameplay, with the GPU using just over 250W of power at its peak, while temperatures peak at what looks to be around 76°C.

The Beast won't come cheap though, with pre-order prices starting at €750. We'll be looking forward to seeing one in action for ourselves and putting it through its paces for a future review.

KitGuru Says: We've been following MonsterLabo for quite some time after being impressed by ‘The First'. The Beast should be available soon, so stay tuned for more on this in the months to come.