Xbox One beats out the competition during Black Friday sales

Microsoft had a pretty good day last Friday, plenty of retailers in both the US and UK were selling Xbox One bundles with significant discounts and it seems to have paid off as the console came out on top, beating the Playstation 4, Wii U and last generation consoles in sales figures. 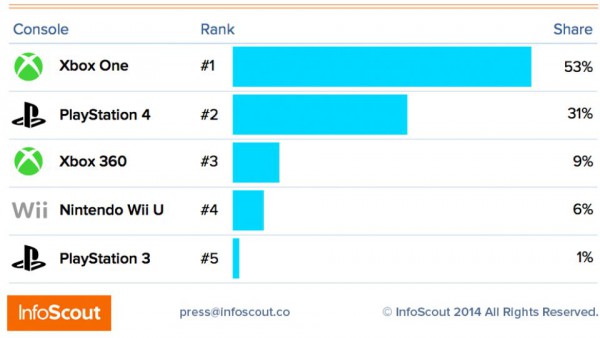 Like with all studies and surveys, there are some caveats. This data is made up of 102,000 InfoScout ‘panelists’, who submitted more than 180,000 receipts over the course of Black Friday- 1500 of which included console purchases. This data includes purchases made at all major retailers that carry electronic devices, according to InfoScout.

To add context, InfoScout notes that 90 per cent of the console receipts it received were for bundles, 75 per cent of panelists claim that the included game was a major influencing factor.

KitGuru Says: Given that this survey is made up of 1500 confirmed console receipts, it is hard to tell how accurate it really is. However, it does give a good indication of overall consumer interest during the sales on Friday. It is obvious that there is demand for Microsoft’s console at a cheaper price, while most buyers don’t seem to mind paying full price for Sony’s console and haven’t held off for a sale, which is evidenced by the overall sales figures. Did any of you guys pick up a console during the sales last week?