Yesterday, we learned that FromSoftware’s iconic title, Dark Souls would be receiving an upgrade for current-gen consoles, due out May 25th. Some reports began circulating, misinforming original game owners that they would be entitled to special treatment when purchasing the remaster, but it turns out these reports were wrong.

The reports arose when listings began popping up, confirming the $40 price tag of the console versions of the game, but something strange was going on with the PC version. The US version of the Bandai Namco Store initially included information on a “50% loyalty discount reward for PC upgrades on Steam,” namely for those that own the Prepare to Die Edition of the original game. 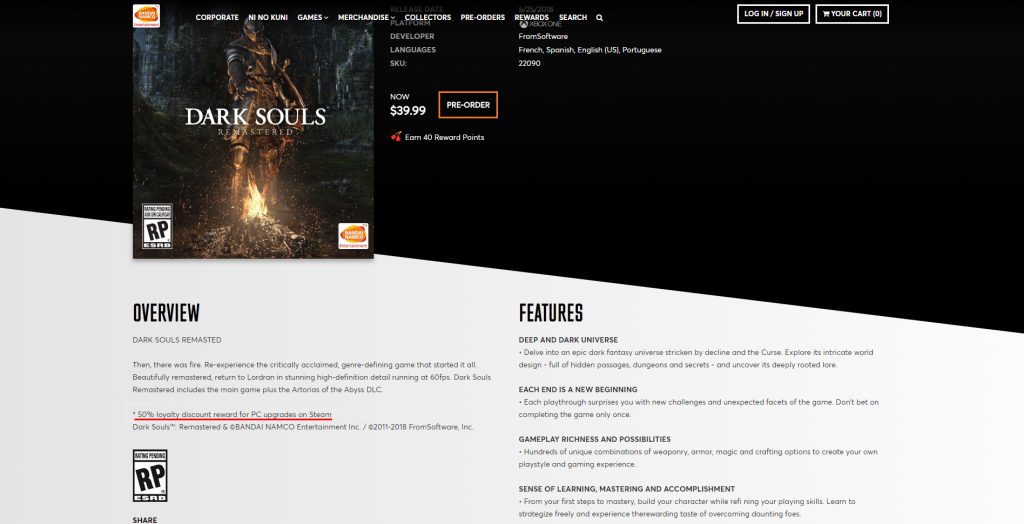 This practice isn’t uncommon for players on the Steam platform, often being entitled to discounts when owning the original game when a remaster is inbound. One notable one for myself was BioShock, in which owner of the original BioShock, BioShock 2 or Minerva's Den DLC were entitled to an entirely free upgrade to The Collection remaster versions.

Since then, Bandai Namco has removed the sentence and assured fans via a spokesperson that the $40 price is across the board for all platforms, suggesting that the original information was made in error. The spokesperson also refused to comment on which engine the Remaster will be running on, as rumours circulate that it might share the same engine as Dark Souls 3.

KitGuru Says: Bandai Namco has offered specific upgrade paths for owners of certain games in its franchise in the past, so it isn’t totally unbelievable that it would want to employ the same tactic again. It seems we won’t know for certain until the Steam Store page goes live. Would you pay the full $40 for the Remaster?