Microsoft’s Cortana has been competing with Apple’s Siri on iPhone for quite some time, but the latest update finally brings the digital assistant to iPad. While all platforms will benefit from the update’s various nips and tucks, the iPad especially will benefit from an “exclusive layout and interface.”

The main reason that the iPad version differs from the standard application available for both iPhone and Android is its larger screen. Cortana will take full advantage of the breathing room it provides, spreading out notifications and reminders so as to not waste too much space.

Just like other personalised assistants, Cortana is built to deliver an experience that is tailor made for its user. This can be from delivering catered news segments based on registered or learned interests, to tracking requested subjects such as the pricing of flights or a parcel that’s been ordered, storing information such as calendar-based appointments and even answering questions it recognises using the most up-to-date information available from the internet. 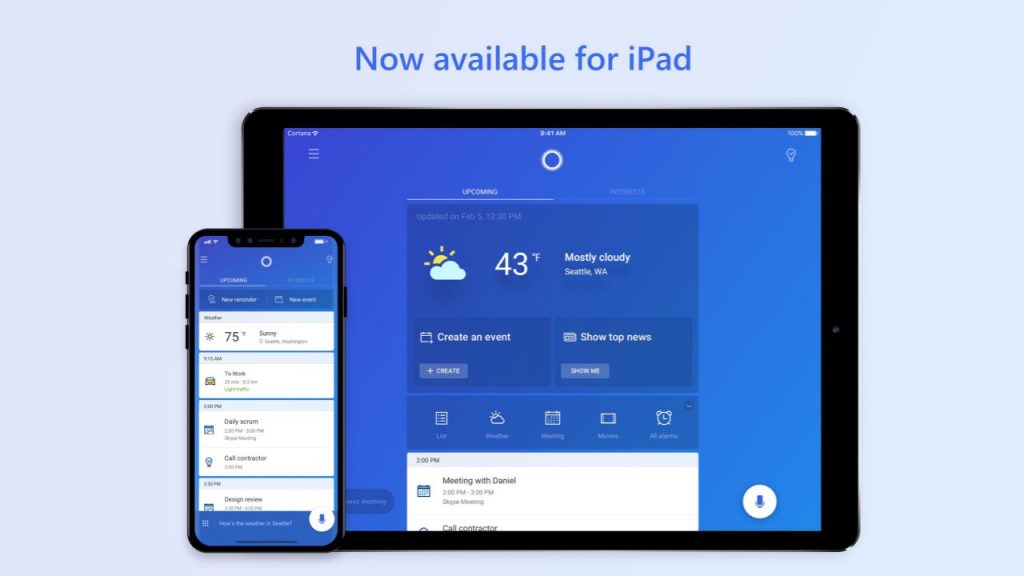 Unfortunately for iOS devices, Cortana isn’t fully integrated into the iPhone or iPad like Siri is, meaning users will only be able to make use of Cortana’s functions from the application itself being booted. This means that the only way to get a response from a digital assistant while on the lock screen is to use Siri, otherwise users will have the option to choose between Microsoft’s Cortana and Google Assistant as alternatives.

It isn't just iPad users that benefit from Cortana's latest update, as there's something for everyone. Microsoft claims that the app now launches 20 percent faster across all platforms, along with some general fixes to ensure it runs smoothly no matter the device.

KitGuru Says: It’s good to see Cortana progressing a little bit further into the territory as Microsoft offers solid competition in the digital assistant market, even if it is usually locked down to proprietary search engines and websites. Do you make much use of digital assistants? Where do you rate Cortana in comparison to its competition?