Last week, Nintendo spontaneously introduced a new review feature, allowing players to post their thoughts and ratings on the eShop for a selection of games. Fans rejoiced at how detailed the new system was, until it was abruptly pulled from the store without warning.

The discovery of the new system was posted to Reddit last Friday, with fans rejoicing at the introduction of a comments section and the ability to add useful tags, alongside the traditional 5-star rating. These tags included “kid appropriate,” “family friendly” and “all ages” which are incredibly handy for parents considering Nintendo’s push into more mature content on the Switch, to “multiplayer,” “immersive” and “great sound” for general information.

Perhaps my favourite part of the recent overhaul, however, was the ability to sensor spoiler sensitive reviews with a simple tick box at the bottom.

Unfortunately, this system has been removed for the time being, with Nintendo explaining that “customer reviews have been taken offline as we evaluate this feature and its functionality. We currently have no estimated date on when an update will be provided. We appreciate the positive response and thank the reviewers who provided such thoughtful commentary on the games.” 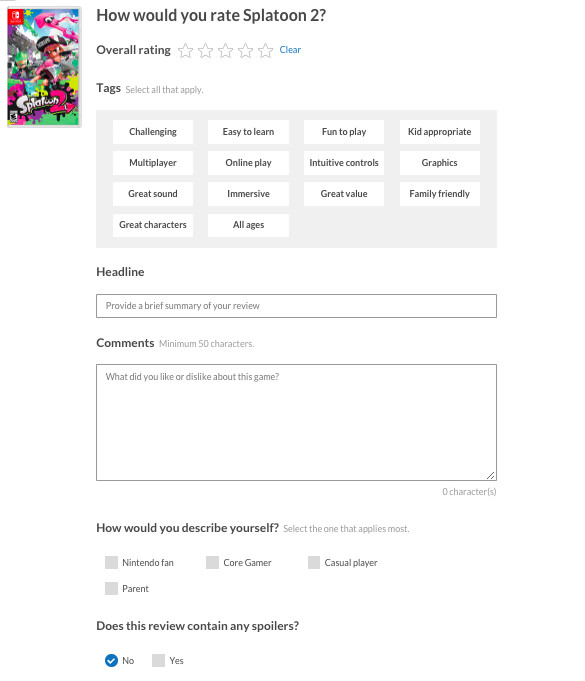 Considering its flagship games like The Legend of Zelda: Breath of the Wild garnered extremely positive reviews across the board, the decision to remove the system was a confusing one for fans. Nintendo has since explained that this was simply a trial period and that reviews have been taken offline to adjust and tweak accordingly. You can read the full statement below:

“Nintendo.com recently offered a trial customer review feature to let users share feedback about Nintendo Switch games on our website. The response has been positive, and Nintendo appreciates the time and effort that reviewers put into their thoughtful commentary on the games. Nintendo has removed this feature as we evaluate the future of the ratings functionality on Nintendo.com. We have no estimate on when an update will be provided on the status of this initiative, but we appreciate the enthusiasm shown for the trial.”

KitGuru Says: One thing that concerns me is how Nintendo will handle review bombing, a practice in which players hone in on one negative feature and make it their mission to destroy a title’s ratings until it’s changed. This is new territory for the company, so it remains to be seen what comes next. Do you like the idea of a fully-fledged review section on the Nintendo eShop?