Home / Software & Gaming / Nintendo’s Switch is getting four times the amount of games this year, PC continues to be a favourable platform

Nintendo’s Switch is getting four times the amount of games this year, PC continues to be a favourable platform

Nintendo’s Switch has enjoyed quite a lucrative first year, with 2017 giving us a new Zelda, Mario and Xenoblade title among third-party support. 2018 is set to be a great year for the console, as game developers are making approximately four times as many games for the platform.

The information comes from the annual Game Developers Conference survey, in which 4,000 industry professionals were asked about what they were working on. Last year, just 3 percent of the developers in question were catering to the Nintendo Switch, which has since risen to 12 percent of developers currently hard at work on a title for the hybrid console. A further 15 percent of developers revealed that their next title would be landing on the Switch.

PC still dominates the scene for developers for another year, with 60 percent of developers currently working on a game for the platform. This is considerable growth from 2017, in which 50 percent of people had PC in mind for their titles. Concerning developers’ next titles, PC is keeping strong as a platform of choice to 58 percent.

“The Switch is one of the banner takeaways, though the PC is strong,” explains GDC runner and vice president at UBM Technology, Simon Carless. “It’s relatively rare to see things swing so much. If the PC and console markets are tough, mobile is even tougher,” Carless said. “The larger players are spending money on user acquisition and they’re getting an advantage.” 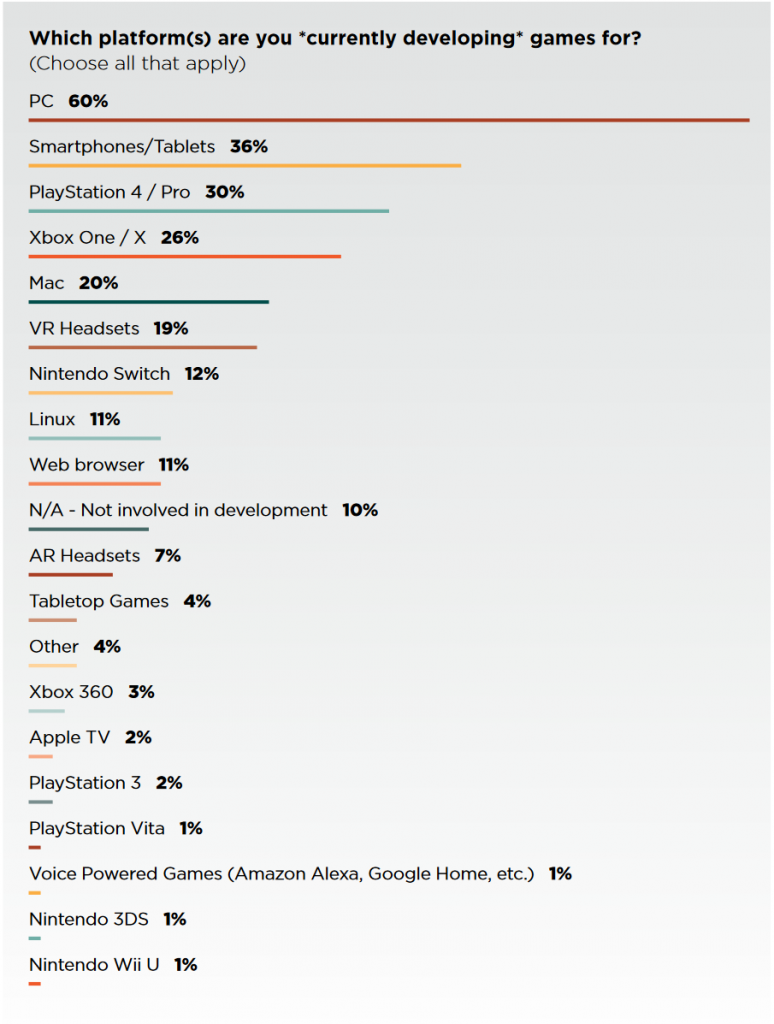 The console and smartphone markets are each seeing a drop in development, with PlayStation 4 and Xbox One support each falling 7 percent, with the former going from 30 percent to 23 percent and the latter 26 percent to 19 percent on current games in 2018. Smartphone development risen from 32 percent in 2017 to 36 percent, but will be seeing a dip on developers’ next games back down to 32 percent again.

Virtual Reality is experiencing a dip, too, with its initial rise from 15 percent of developers working on a title in 2017 to 19 percent in 2018, but will be dropping right back down to 15 percent again for future titles. This could change depending on the climate of Windows Mixed Reality headsets as each developer is continuing to release their own.

In perhaps the strangest turn of events, Sony’s PlayStation Portable console is seeing an extremely small resurgence since all models were officially discontinued in 2014. 1 percent of developers declared that their next title would appear on the platform despite just 0.4 percent of developers the year prior and no developers currently working on a title with the PSP in mind.

KitGuru Says: The statistics are an interesting indication of the way in which the markets are currently swaying, but it is only a pool of 4,000 developers asked. My prediction is that VR will see some growth due to Windows Mixed Reality and the Nintendo Switch will continue to grow given the platform’s youth. PC will likely maintain the strongest hold, but it is possible that it might dip as the Switch grows. What is you preferred platform of choice?