Last week, Rockstar Games and Take-Two Interactive began gearing up to search and seize the equipment of cheat makers in Australia, thanks to a Federal court order. This is an approach that the Grand Theft Auto V-makers have been taking for quite some time, however, particularly right here in the United Kingdom.

TorrentFreak reports that Rockstar and Take-Two filed a motion to take broad action against multiple members believed to be behind the “Infamous” cheat. This cheat in particular is known for teleportation, generating virtual currency, allowing players to super jump and enabling a God Mode for invulnerability.

The broad lawsuit allowed the company to enter the homes of all alleged perpetrators to search the property and seize anything of value to the case at hand. This spans across five known persons by the names of Christopher Anderson, Cycus Lesser, Sfinktah, Koroush Anderson, and Koroush Jeddian, who are expected to make their defence later this month. 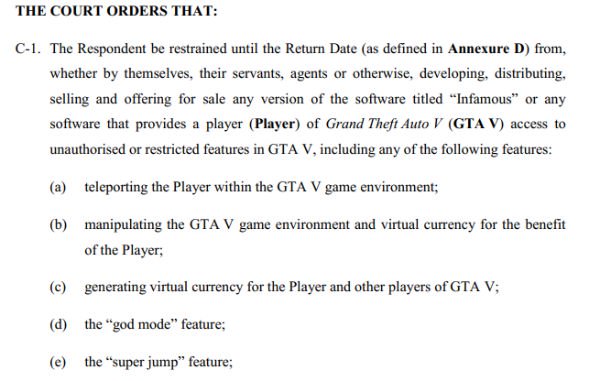 An anonymous source explained Rockstar and Take-Two’s process after his home was raided in the UK just last month in relation to a different cheat software. It begins with six company officials arriving at the property carrying a recorder and a brown envelope, supposedly containing “a warrant to search and seize anything in this house we want that could help with this case.” While households have a right to seek legal advice before anything happens, the family of the alleged culprit unknowingly waivered this right by allowing them to search the property.

The legal representatives booted any computer in the vicinity, screenshotting pertinent information such as “CEVO, FaceIt, ESEA and even a CS:GO servers website.” Following this, it wasn’t just the system in question that was bagged for evidence, but all computers in the household no matter of their owner, consoles and even smartphones too.

“We can take any computer, mobile, flash drive, floppy disk, SD card and CD/DVD we want if we feel it will help out case,” they explained as law enforcement arrived to support the raid. The company claimed that this action was due to “loss of profits,” supporting TorrentFreak’s assumption that Rockstar and Take-Two are more than likely chasing “copyright infringement related damages.”

The GTA V publisher is certainly taking cheating seriously in its game, perhaps in hopes of setting a precedent for the upcoming Red Dead Redemption II.

KitGuru Says: Although I have absolutely no sympathy for cheat makers of any kind, these ham-fisted actions do tend to have an effect on those surrounding the alleged perpetrator, such as KitGuru’s source. Still, do the ends justify the means?