Year 4 is just around the corner for Rainbow Six Siege fans, with Ubisoft outlining a range of content and changes on their way. First up is the Australian-set Operation Burnt Horizon, which will introduce players to Operators Gridlock and Mozzy, alongside the only new map of the year, Outback.

Gridlock is a slow attacker, sporting three armour and a brand new gadget called Trax Stingers. These spike-clad traps aren’t affected by Jäger’s ADS, multiplying into clusters when thrown. Although it’s worth taking these out to avoid the 10 damage per trap, it can be quite a noisy job shooting each one, time consuming if players use melee to destroy them and costly should defenders use utility to quickly wipe them out. Her loadout gives players the choice between the F90 assault gun and M249 SAW LMG as the primary weapon and a Super Shorty shotgun as a secondary.

Mozzie is armed with a Commando 9 assault rifle and a P10 Roni automatic pistol; however it’s the Pest Launcher gadget that really changes up the meta by hacking attacker drones. Players can choose to shoot drones as they arrive, or use the Pest Launcher’s area of affect to block doorways, windows and drone holes. Although Mozzie cannot pick the drone up, he can drive them around as an attacker normally would. And yes, this includes shocking people with a Twitch drone.

An attacker can no longer use the drone once it has been taken over, but they will be able to view it if Dokkaebi hacks defender cams. While defenders will get a white outline to showcase which drones not to shoot, attackers will have to keep an eye out for the blue LED on the top of the device. Alternatively, IQ can be dispatched to see them with her scanner. 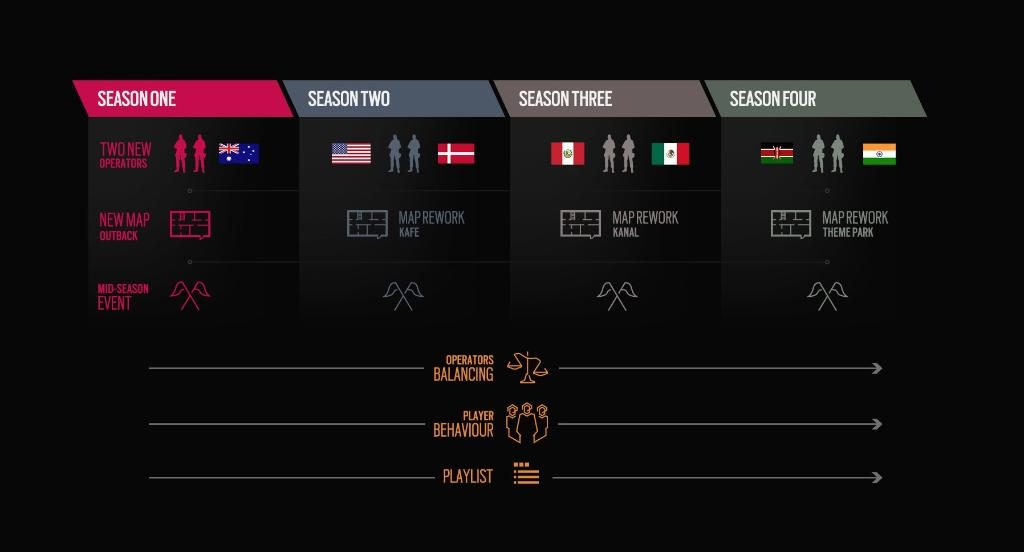 Outback is controversially the only new map in the upcoming roster, as Ubisoft places a greater focus on the balancing of older maps. Season 2 will see the Russian map Kafe Dostoyevsky reworked before a more comprehensive overhaul of Kanal in Season 3 and tweaks to Theme Park in Season 4. Operator releases will remain the same, with an attacker and defender coming out each season, making 8 in total.

Alongside debuting its first countermeasures to lean spamming on its way during Year 4, Ubisoft will also be changing how teamkills work. After the first teamkill, the perpetrator will be subjected to further damage they impose on allies will be redirected against them, stomping out toxicity. New players will be introduced to a Newcomer game mode, which will ease their transition by teaching them the basics before heading into Ranked.

It will be interesting to see where Rainbow Six Siege is headed, as a greater emphasis is placed upon narrative. This is hardly surprising given that the game is running 45 million players strong. Check out Ubisoft’s story cinematic “The Hammer and the Scalpel” above.

KitGuru Says: While I’m glad that Ubisoft wants to bring older maps up to the standard of those already within Pro League, it does seem like we will be getting less content this year as the lines blur between “map buff” and “rework.” Still, the developer’s hard work can’t be overlooked as the game has come a long way from its origin. What do you think of Year 4? Is it shaping up how you wanted it to?

Previous Razer’s Game Store is set to close less than a year after launch
Next be quiet! Dark Rock Pro TR4 Review