Ark Park is an educational Survival Evolved, in VR

ARK: Survival Evolved is coming to virtual reality, but not in the exact same guise as its original release. This isn't some Survival of the Fittest game mode either, but an educational, open world of dinosaurs and environments to explore. Coming in 2017, virtual reality is getting tickets to Ark Park.

If you had told young Jon that he'd have to wait more than two decades after the release of Jurassic Park to visit such a place, I don't think I could have handled it, but knowing that we're mere months away from doing so in virtual reality, has me all kinds of giddy. While Time Machine VR might have given us a glimpse of an educational dino experience in VR, Ark Park looks set to take it to a whole new level.

Developed by Chinese studio, Snail Games, with Wildcard providing guidance, Ark Park is an officially licensed version of the original ARK content and lets users explore swamp, forest, desert and snowy mountain range environments, all populated with the high-fidelity dinosaurs we've come to know from Survival Evolved. Visitors to Ark Park will be given educational information about the dinosaurs and will be able to interact with them while travelling through the open world environments, whether on foot, in the back of a jeep or even while riding some of the creatures themselves. 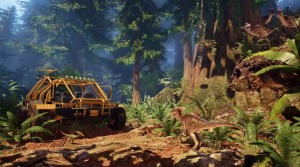 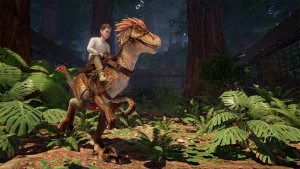 The game won't be just about watching though. You'll be tasked with recovering genetic information from many of the dinosaurs, some of which will be illusive and timid, so may require coaxing with a carrot or stick.

For those who have been playing ARK for a while, you'll be able to import your favourite dinos into the up-close petting area too, where you can interact with them like never before.

ARK Park is set for release in 2017 on Oculus Rift, HTC Vive and PlayStation VR.

KitGuru Says: It sounds like Pokémon Snap with dinosaurs, in VR, which is all I ever want to do in life.