The developers for the decentralised torrent client, Tribler, have released a new update to help improve the digital security and privacy of its user base, by making them all anonymous and untrackable thanks to an implementation of the Tor browser network into the client.

Traditionally, and with almost all other torrent clients, while there are a lot of seeds and a lot of leechers, they’re all connected directly to one another, so it’s easy for law enforcement, lobby groups or government spies to look at what you’ve been downloading. Initially the Tribler developers considered adding a single proxy between you and your files, but that then relies on that proxy not being raided or snooped on in turn.

To go one step further, Tribler devs. have now implemented a triple layer proxy system. This means that even if one proxy were compromised, the others would still anonymise the traffic. Each of the proxies being used encrypts the data too, so if it was somehow intercepted it wouldn’t be readable to anyone but you anyway. 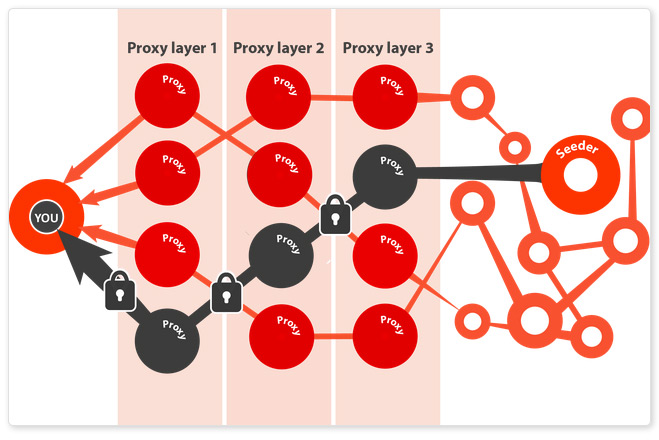 The only downside to all this, is that the humble seeder at the start of the chain is currently still vulnerable. Tribler wants to fix that in the future, by implementing a seeder proxy network that sits between the original seeder and the various download proxies.

You can give this new feature a try yourself, though at the moment it’s only available for use with a 50MB test file. It’s worth mentioning that it is somewhat slower than traditional downloads too, since you in turn will become one of the anonymous proxies for someone else.

KitGuru Says: While legal action against downloaders and uploaders has stopped for the most part, this update would certainly make any future ones nigh on impossible.