As with almost every big show since its debut early last year, one of the most hotly anticipated technologies at CES was the Oculus Rift. We all knew the new prototype was going to be a higher resolution and have head tracking and it didn’t disappoint, even if it didn’t bring anything particularly unexpected to the table. However one of the big questions on the minds of a lot of people visiting the stand was: ‘where’s John Carmack?’ The co-founder of id Software and creator of the Doom series left late last year to become Oculus’ CTO, so you’d think he’d be in attendance.

This is big news, as one of the biggest problems with the Rift at the moment is an old one. No not the screen door, not the low resolution of the Devkit, it’s the chicken and egg scenario that’s plagued every new piece of gaming technology since the dawn of time. In this instance we need games to play on the Rift, but there’s no point in anyone developing any if no-one is going to buy them.  It’s the same problem the Wii U is suffering from at the moment but on a smaller scale as instead of 3.5 million home consoles out there, Oculus has less than 100,000 Rift owners. 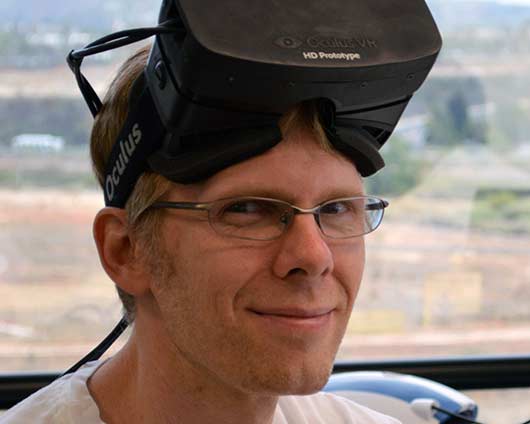 So making first party games makes sense. There might be a lot of great talent in the indie developer community, with some titles like Asunder: The Descent and Private Eye exploring gesture controls and new gameplay elements, but they’re not full games yet. You can also go back and play some retrofitted games like Half Life 2 in the Rift, but while ‘complete’ in a sense that they’re full gaming experiences, they aren’t designed with the Rift in mind (and my god if you move your head during the load screen pauses does it make you feel nauseas).

When pressed on what sort of games Carmack was working on, Oculus CEO Brendan Iribe remained coy, stating: “You’ll see, over the next six to 12 months, if you monitor the careers page, we are putting up our team out there. We wanna make this a very open company. Pay attention to that page and you’ll see more and more game developers showing up.”

As Engadget points out, if Oculus is getting into game development – and most likely publishing too – it could very well provide support for third party developers as well, or even absorb any small teams that are working on something unique.

Kitguru Says: All of this is good news. It means when the Rift lands for real, we should have some nicely detailed and lengthy gaming experiences to play on it.