Among Us hit with huge spam bot attack

Among Us has had issues with cheaters for a while now but a new issue popped up this week – spam bots. A wave of spam bots has impacted millions of Among Us players this week.

The bots all seem to be promoting a YouTuber known as Eris Loris, as well as the Trump 2020 presidential campaign. Some of these spam messages claim that users' devices will be ‘killed' if they don't subscribe. The hack can also impact gameplay, removing the game map and leaving everyone stuck in a black void. 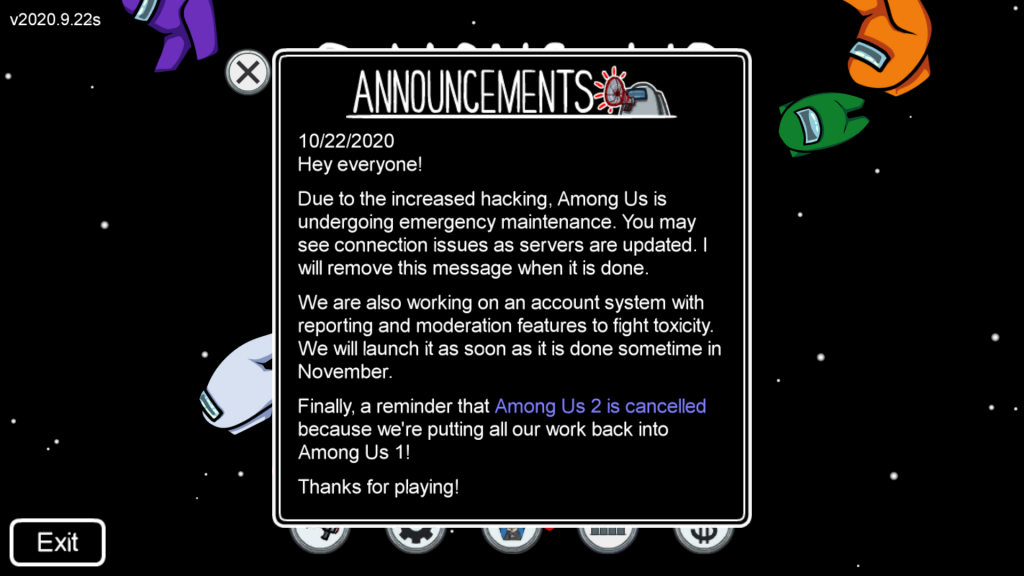 Eurogamer joined the Discord channel responsible for the attack and spoke with Eris Loris, the person behind it all. According to him, this is all a “publicity stunt” for the other cheats/hacks he sells for other games.

People on Discord were donating their systems to the cause to allow the bot to spread faster. In all, the group claims to have hit 1.5 million games and affected 4.9 million Among Us players. The bot has been switched off for now and Among Us went into emergency maintenance mode. Eris Loris is unfortunately open to turning the bot back on again though as long as people continue donating servers.

KitGuru Says: Among Us desperately needs better anti-cheat and moderation tools. The first step in that direction should be coming in November with the implementation of an account system with reporting/moderation features to fight toxicity.

Previous KitGuru Reader Awards 2020 – win a Philips 55″ Momentum Screen!
Next Call of Duty: Black Ops Cold War will have an exclusive mode only for PlayStation