EA doubles up on Star Wars with Battlefront II re-release

EA has already managed to cash in on the Star Wars license this winter thanks to the launch of Jedi: Fallen Order, but the publisher will be looking to double dip ahead of the Rise of Skywalker theatrical release later this month. Today, EA is launching Star Wars Battlefront II: Celebration Edition, adding new cosmetic content and promising some Rise of Skywalker themed updates later in December.

Star Wars Battlefront II has come a long way since its original release and has improved quite a bit, although the game never did manage to fully bounce back from its initial controversy. With the Celebration Edition, EA is bundling the following: 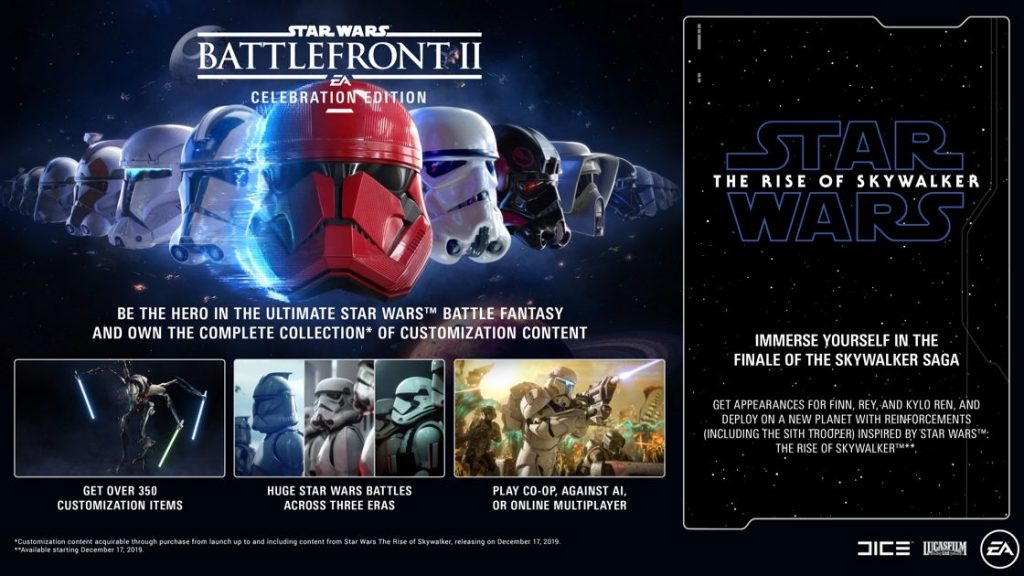 The release of this latest version of the game coincides with the first of two updates planned for this month. The update rolling out today includes new cosmetics for Reinforcements, like the Clone Commando, Arc Trooper, Droideka etc. Then on the 20th of December, the Rise of Skywalker update will launch, adding in new hero appearances and a new map to coincide with the film’s release.

Existing owners of Battlefront II can upgrade to the new edition for $24.99, while new buyers will have to pay $39.99 on Xbox One, PC and PS4.

KitGuru Says: I’ve had my fill of Star Wars gaming this month already thanks to Jedi Fallen Order, but it will be interesting to see what people think of Battlefront now after two years worth of updates. Are any of you thinking about jumping back in and giving the game a second chance?