Last week during Gamescom, we got fresh new looks at the Gears 5 campaign mode and the new horde mode. Now just ahead of release, we have new details on the PC launch, system requirements and PC-specific enhancements, some of which focus on AMD specifically.

System requirements for Gears 5 are split into a few segments. There is a minimum, recommended and an ‘ideal’ set of requirements for both AMD and Nvidia. You can see the full spec breakdown in the image below: 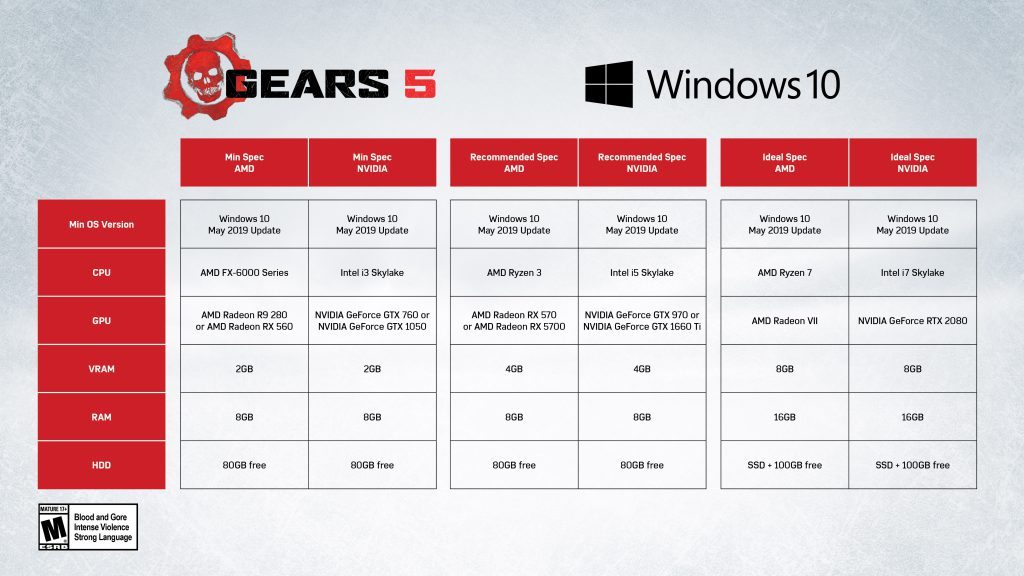 The PC version of Gears 5 will ship with over 35 customisable graphics settings, which shouldn’t be too surprising if you spent much time in the Gears 4 options menu. We don’t have the full list of tweaks just yet, but everything that you would expect is included, from texture details, to shadows, environmental enhancements and post-processing effects. On the AMD side, the game will support Asynchronous Compute for Radeon GPUs, multi-threaded optimisations for Ryzen’s high core count and support for AMD FidelityFX, a sharpening filter to boost detail in low-contrast areas of a frame.

For the PC version, there is also an Ultra Texture graphics pack as an optional add-on, and the game will support not only 21:9 ultrawide, but 32:9 super ultra-wide too. All keybinds are remappable both on keyboard and controller, so you can get the game feeling just how you like.

Anti-cheat will be handled by the Easy Anti-Cheat system. Crossplay is included across PC and Xbox (although Xbox owners can choose to switch this off),. Beyond that, Play Anywhere is supported, so those buying the Windows Store version of the game will also get it on Xbox One and vice-versa, although this does not include Steam. With that said, the game is launching on Steam on the same date as everywhere else and supports Steam’s own achievements as well as Xbox Live achievements.

Local split-screen co-op and online co-op are both supported on PC. Game Ready drivers will be available at launch from both AMD and Nvidia and finally, those who pre-order or have a Game Pass Ultimate subscription will be able to play the game on any platform four days early, starting on the 6th of September.

The Coalition team is hoping to make Gears a leading series in graphical fidelity and features on PC. Hopefully that will prove true when we get to spend some time with the game at launch.

KitGuru Says: Gears 4 had some issues on PC, most of which stemmed from the sheer size of the game and install issues with the Windows Store. Hopefully those issues won’t pop up again this time around, especially with Gears 5 looking like it could be much more ambitious all around.