Evolve has been out for around six or seven weeks now and in that time, the player base has dwindled a bit, according to the Steam statistics. However, Turtle Rock is looking to pick up the slack with four new hunters and a new monster, which are now available.

Obviously if you didn't buy one of the more expensive versions of the game that came with the Hunter season pass or the monster DLC as bonuses, then you will have to pay extra to play as any of these characters. £6.19 per hunter and £12 for the monster, which is very steep. There is also a £20 season pass but this only grants access to the hunters. 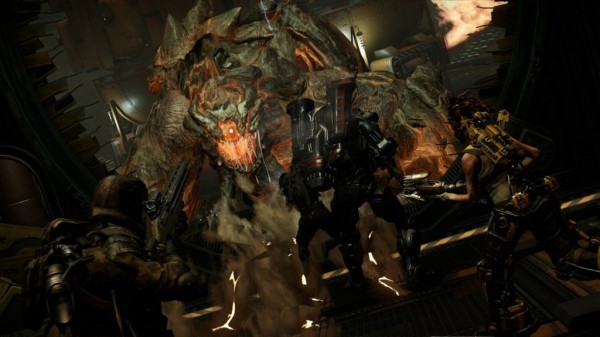 The DLC released yesterday on the 31st of March. There are two new maps available but only on Xbox One for the time being, maps were intended to be free as to not split the player base but for some reason, Turtle Rock thought it would be appropriate to make them timed platform-exclusives anyway.

Tier 4 hunters include Torvald, a new assault class with the ability to fire off mortars, shrapnel grenades and a shotgun. Next up is the new trapper, named ‘Crow', he is equipped with a bat that can be sent off to find the monster, he also has a stasis gun, and a rifle.

The new medic is called Slim and comes with a health draining weapon, which in-turn charged up the healing burst ability, making it a little different from the other medics. The final new hunter is Sunny, the support, who comes with a mini-nuke launcher, a jetpack recharge booster and remote shield drones.

Aside from all that, the Behemoth monster is available, a giant rock-like creature that can roll around the jungle at high speeds. He can also throw explosive rocks, and set up rock walls, either to trap a hunter or to make a quick escape. You can read the full patch notes, HERE.

KitGuru Says: I have had some fun with Evolve but the matchmaking can be quite slow at times. I'm also not a fan of the DLC model. That said though, I am looking forward to trying out the new hunters and monster, although I do think it is a shame and a bit odd that Turtle Rock would hold back the free maps on the PC and PS4.

Previous KitGuru TV: 3D NAND and SSD interfaces
Next MSI OC Academy Event: What’s Going On and How To Watch