A few Super Smash Bros 3DS players have been hit with massive 136 year bans from playing the game online. The lengthy penalties seem to have been dished out due to a bug in Nintendo's automated anti-griefer system, which is designed to punish anyone aggressively targeting a specific player during group matches.

Smash Bros should typically ban people for 15 minute periods but those affected by this bug have been given messages informing them that they can't play online for 71,582,030 minutes- or 136 years. 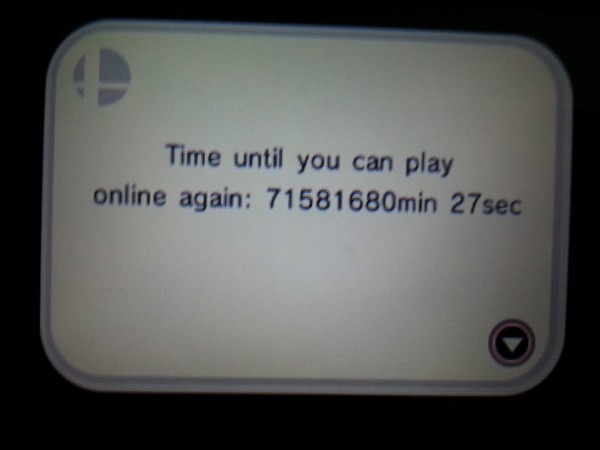 One Reddit user has attempted to figure out exactly why the ban has reached that ridiculous number. The current theory involves it being a simple error in the code used to determine ban length.

What's worse for these affected players is that Nintendo has yet to address the issue or even acknowledge it publicly. There's currently no clear way to avoid this happening to players aside from avoiding the game's online mode entirely until this bug is gone. That said, it's possible that one on one battles should be fine.

KitGuru Says: Hopefully Nintendo will fix this bug rather fast as 136 years of ban time seems pretty excessive. Automated systems are never perfect and these things tend to happen from time to time, hopefully those affected will get their bans lifted and can continue to play the game fairly soon. What do you guys make of this? 136 years seems pretty crazy.