The Witcher 3 has over 1 million pre-orders

It turns out that people do still pre-order games from time to time as CD Projekt Red has revealed that The Witcher 3: The Wild Hunt has managed to surpass the 1,000,000 pre-order mark worldwide ahead of its release date on the 19th of May.

The Witcher 3 is set to launch next Tuesday on the Xbox One, PC and PS4. Although some retailers have been caught breaking street date by selling the game early. The game itself has had some troubles along the way, with release dates being pushed back and a huge leak revealing the ending of the game last year. 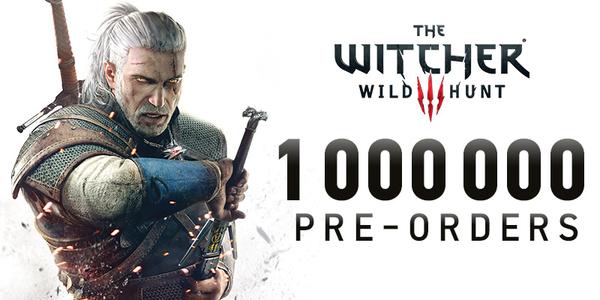 The game itself is said to be optimized well on all platforms according to CD Projekt Red. On the console side of things, the game will be running at 1080p on the PS4 while the Xbox One version will make use of Dynamic Resolution technology, switching between 900p and 1080p depending on what is happening on-screen at the time.

On the PC side, the game will be updated to make use of Direct X 12 when the API officially launches with Windows 10 later this year. Those who pre-ordered the game on GOG and Steam can pre-load the game now ahead of time.

KitGuru Says: The Witcher 3 is finally almost out. Did any of you pre-order the game? I usually tend to avoid pre-ordering myself but after playing the first two Witcher games, I trust CD Projekt Red to do a decent job.