Valve is moving in to the games broadcasting space, having launched its new live streaming beta service, Steam Broadcasting. Steam users can now opt to let friends watch gameplay or start up a completely public stream, allowing anyone to watch via the community hub. 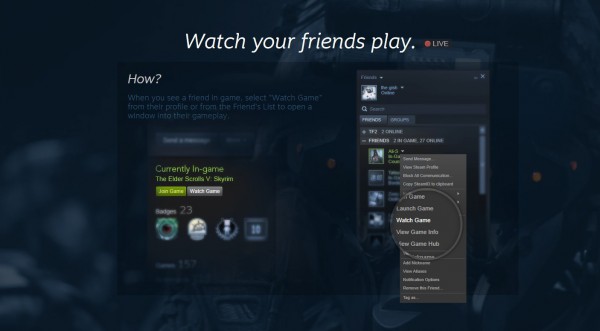 There are some limitations though, broadcasts can only be watched in Safari, Chrome and the Steam client and broadcasts can't be archived yet for those wanting to get serious about creating a content library. Additionally, there are no partnership programs, which is a big part of why so many gamers and YouTubers have moved over to Twitch.

Valve is a big player in the PC gaming space but Twitch isn't worried about the company's move in to live streaming, stating that: “While Steam’s broadcasting solution and the Twitch platform are very different with vastly different feature sets, it’s really validating to see a company like Valve embrace streaming in this way.”

KitGuru Says: Steam broadcasting is a pretty good idea and does add an extra social layer to gaming on Steam. However, many streamers, particularly the ones with partnerships, will likely stick with Twitch so I wouldn't worry about its popularity dying down. It would have been cool to see Valve and Twitch team up for streaming integration, much like on the Xbox One and PS4. What do you guys think about Steam Broadcasting? Are you going to start using it? Will it steal people away from Twitch?