Valve’s VR headset is getting a zombie horde shooter

Valve and HTC’s collaborative virtual reality headset has a new game heading to it. The game is called ‘Arizona Sunshine’, a zombie shooter title being made by Vertigo Games, a studio that has primarily focused on making games for the PlayStation 3, mobile and now virtual reality as well.

In Arizona Sunshine, players will be put up against zombie hordes, set in a post-apocalyptic version of Arizona. The game will run on the HTC Vive headset, making use of its motion controllers, players will also need to manage consumables and weapons in order to stay in the fight. 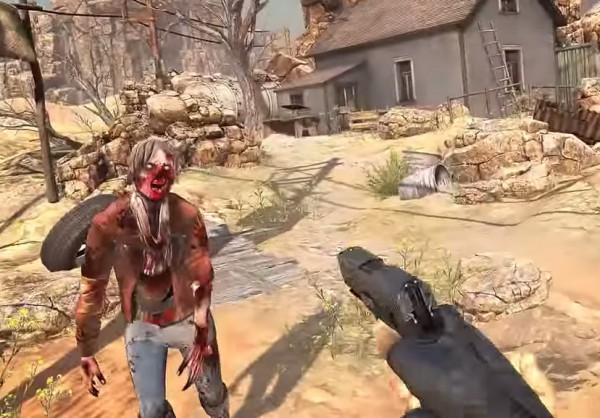 Arizona Sunshine is already up on the Steam Store, with a release date set for later this year. This isn’t Vertigo’s first Steam VR title either, it showed off another project at GDC earlier this year called ‘Skyworld’, which is a turn-based strategy game.

Arizona Sunshine is built to allow players to jump in and out in small bursts with the motion controls thrown in for added realism. The game’s description reads: “Arizona Sunshine is a VR shooter built and optimized for room-scale VR from the ground up. Step into the midst of a zombie apocalypse as if you were really there, and defend yourself against enemies close enough to touch. A custom-built physical animation system makes striking your undead enemies more thrilling and satisfying than ever before.”

KitGuru Says: Valve’s Steam VR headset is launching towards the end of this year, so its nice to see some games announced for it ahead of time. Are any of you looking forward to Valve’s step in to virtual reality? Do you think Valve will launch a game of its own for the occasion?

Previous Win 3 Total War ATTILA keys with KG and MSI this weekend!
Next Intel bids adieu to DDR3: Majority of ‘Skylake-S’ mainboards to use DDR4