Nitro Concepts’ S300 gaming chair has managed to impress KitGuru and our readers alike, with its comfort and versatility being highlighted as among the best. Now, the company has partnered with football club Sport Lisboa e Benfica to make a brand new special edition variant of the S300, clad out in the team’s colours.

The S300 SL Benfica Special Edition adopts the same racing style as previous variants, with the Nitro Concepts logo proudly displayed in the centre, blow the vent. Above is the modern Sport Lisboa e Benfica logo with three stars, each representing 10 league titles that the club has under its belt.

Its signature red theme is prominent on the seat and in a V for victory across the back rest, complimented by black and white accents. The rear of the chair is all black aside from its red wings, with a larger version of the club’s logo in the centre.

The core design of the S300 SL Benfica Special Edition houses the same features as its predecessors, sporting factory-fresh 55% cold foam upholstery, adjustable 3D armrests, seat height and backrest, 360-degree rotation and rocking mechanism as well as the premium components that enable these functions. The Special Edition also comes with two logo-emblazoned cushions and a neat two-year warranty for any problems that might occur.

Of course, the S300 SL Benfica Special Edition is a big hitter in Portugal and is now available in the United Kingdom from Overclockers UK for £229.99.

KitGuru Says: Gaming chair manufacturers pairing with sports teams seems like a match made in heaven. Unfortunately, there are so many teams to cater for, not to mention other sports and the rising popularity in eSports that it’s hard to know where to begin. What would you like see designed by the guys and girls at Nitro Concepts? Personally, I’d be a big fan of a KitGuru chair but maybe I’m biased.

Previous A new Dragon Age game is in development, but it might take a while
Next Facebook to improve its livestreaming features, enticing more content creators 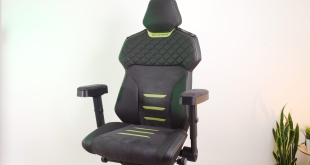 Backforce One Plus Gaming Chair Review

Designed and built in Germany, is the Backforce One Plus your next gaming chair?