Samsung’s latest patent curves the screen around all four edges

Although the Galaxy S10 is set to offer the most screen-to-body ratio we’ve seen to date, Samsung’s mission to eradicate bezels and the divisive notch extends beyond the upcoming flagship. The firm’s latest patent is perhaps the most futuristic we’ve seen, with renders showing its signature Edge design brought to all four sides of the device.

Over the past few years, Samsung has been testing its bendable display technology by wrapping the screen around the left and right side of its handsets. This Edge technology has since made its way to other devices, such as Huawei’s Mate 20 Pro, but Samsung is seemingly ready to extend its screen across the top and bottom of the smartphone as well.

Filed with the World Intellectual Property Office (WIPO) in April, the patent is set to utilise the same flexible OLED panels shown during the unveiling of the flexible Galaxy X hybrid device. Given that the Samsung Galaxy S10 is just around the corner, this is likely our first concept based around a potential Galaxy S11 in 2020. Of course, no design will be finalised at this stage, but that hasn’t stopped the folks over at LetsGoDigital from creating stunning renders based on the images. 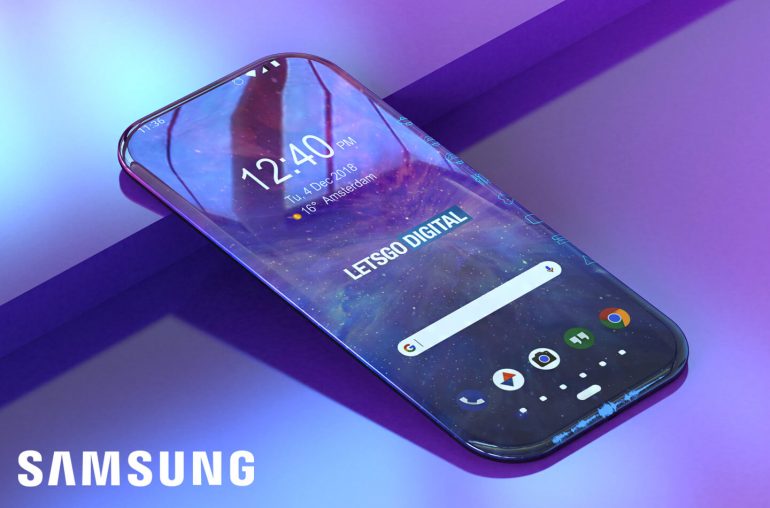 The possibilities of the extension remain a mystery, however current technology on the Galaxy S9 allows users to place program icons such as the phone and messaging app on the curve. Beyond this, Samsung has kept hush on how its software will handle such a large screen real-estate.

The speaker, front-facing camera and sensors are also absent on the visual for the patent, believed to be housed underneath the display. This is technology that Samsung is rumoured to have been working on for quite some time. The strangest omission is the charging port, currently USB Type-C, suggesting that this device would only be capable of wireless charging.

This could very well be another one of Samsung’s patents that ends up topping the mountain of unused designs that preceded it, so readers should perhaps temper their expectations for the time being.

KitGuru Says: Although these designs are undoubtedly beautiful, I have to say that four sides of input would cause some serious caveats. It’s already easy enough to knock something accidentally when shuffling an Edge device, let alone resting it on the bottom bezel. How do you feel about Samsung’s latest patent?