A couple of months have passed since Samsung announced its intent to field a lightweight laptop under the Galaxy brand, the Samsung Galaxy Book, and the company has begun delivering on its promise. If you are in the US, April 21st is the first day the devices are available for Pre-order.

The Galaxy Book is a 2-in-1 device, similar to the Microsoft Surface in design, but with a lower price tag. It is not, however, powered by any ARM processor nor does it use anything other OS than your standard Windows 10 Home edition (Windows 10 Cloud is reportedly exclusive to Qualcomm Snapdragon) and Samsung seems to be left out in the rain by the Qualcomm-Microsoft partnership, restricting it to using Intel’s Core m3 or low-power Core i5 processors. The device comes in 10.6″ (1920×1080) or 12″ (2560×1440) form factors. LTE connectivity is available on the 12″ model only. The Galaxy Book also comes with the Note-famous S Pen, and contains a nice bit of software which will sync up your Galaxy smartphone with your Galaxy Book, Samsung Flow. You can find full specs for the devices, below. 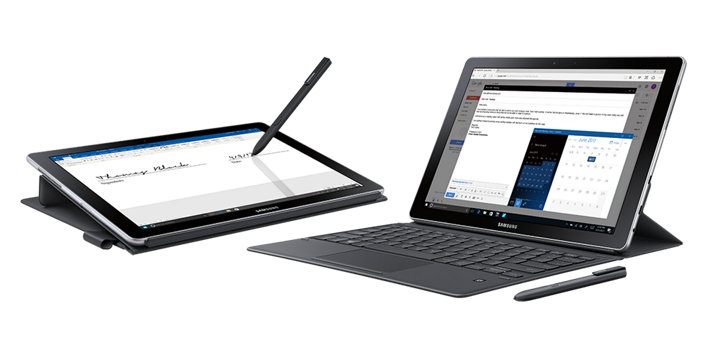 Configurations will cost between $630 and $1130, and deliveries will begin in late May. Samsung, however, did not announce telco partnerships for its devices – something that in Europe would be considered somewhat of a deal-breaker for the LTE version of the device, due to mobile data costs.

KitGuru Says: Samsung looks like it’s piggybacking on the momentum created by Surface and Microsoft’s own initiatives in developing lightweight computing devices with Windows compatibility. However, this family of devices doesn’t seem to harbour anything particularly Galaxy-y to support the name.

Previous Retail licenses of Windows 7, 8 and 8.1 can still upgrade to Windows 10
Next Gigabyte shows off first passively cooled BRIX PC

A laptop from Razer that ISN'T meant for gaming?!