The Samsung Galaxy S6 reveal is just a handful of days away but we already have our first look at the new flagship thanks to some new leaks. The Galaxy S6 and Galaxy S6 Edge have been pictured side by side, showing off the new design and a few features.

As you probably guessed, the Galaxy S6 Edge does come with a curved screen, while the Galaxy S6 looks fairly similar to past models despite a few changes. The pictures were shared on the XDA-Developers forum, giving credit to previous rumors that suggested Samsung would launch two devices at the same time. 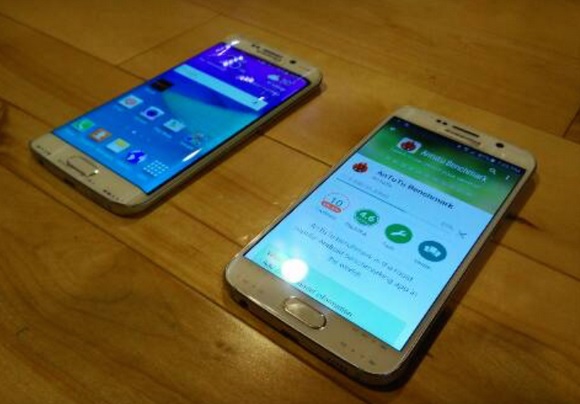 The Galaxy S6 Edge may have curves on both sides of the screen but from the image angle, we can only see one. The curves appear a bit more subtle than the one found on the Note Edge, which was big enough to double as a second screen of sorts for app shortcuts.

It looks like Samsung is finally opting for metal on its flagship devices, ditching the plastic that drew complaints over the last few years. Samsung is due to officially reveal the Galaxy S6 on the 1st of March just ahead of the Mobile World Congress.

KitGuru Says: The Galaxy S6 seems to have a build quality upgrade but overall, the design is still pretty familiar to past models. The Touch Wiz home screen also appears to look the same if these images are indeed legitimate. Assuming that these pictures are the real deal, do you guys think that Samsung has done enough to improve on past models?