Steelseries has a new product line out and you'll never guess what it is. That's right guys, it's headsets! Beautiful, glorious headsets in a new line up titled the H-Series, a revamped version of the original Steelseries award winners first unveiled in 2005.

This new line features the high end 9H, a more mid-range 5Hv3 and the more affordable 3Hv2. All of them feature the “newest generation of Steelseries audio drivers,” as well as the classic retractable microphone and a unified style that blends charcoal with orange.

The 9H is of course, the flagship of the range and features an impressive 7.1 channel surround sound setup, as well as supporting Dolgy Prologic Ilx, which allows for the upmixing of more simple 5.1 or 6.1 soundtracks to the headset's native 7.1. All frequencies are said to be well balanced, providing a varied soundscape where no end of the spectrum should dominate. Steelseries has also improved sound isolation and better microphone noise cancellation. It comes in at £139.99.

The more mid range 5Hv3, doesn't feature the same mass channel support of its bigger brother, but it's much more affordable at £69.99 and features the same sound isolating headphones of the more expensive model, as well as improved audio drivers over the previous generation. Steelseries has also been keen to point out that the in-line controller has been improved and is now compatible with a cable swapping system that makes the headset usable on not only PCs and MAcs, but tablets and phones too.

The little brother of the bunch is the 3Hv2, going for £34.99. It's designed to have less of the features of its more expensive relatives, but still feature the durability and noise cancellation. It also features “next-generation” audio drivers and leather ear cushions for maximum comfort on a budget.

The 5HV3 and 3Hv2 headsets will be available in the next couple of months, with the 9H showing up in early Autumn. Read more about them here.

KitGuru Says: The original line up of H series headsets were some of the first products I ever reviewed. Quite nostalgic. 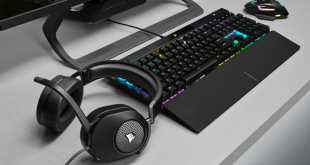 The Corsair HS65 is getting a big upgrade this year. This week, Corsair is launching …