Andre Santos interview – Powercolor will succeed even without mainboards

KitGuru believes that 2011 will be one of the most significant in the history of the personal computer. A real inflection point. Bend of the knee type stuff, where the whole market lurches in new directions and many of the old ways are forgotten. Powercolor has been shaking up the graphics market for the past 13 years, so we decided to get up close and personal with Andre Santos who provides Powercolor with marketing guru-ism in Western Europe.

There is no right or wrong way to run a graphics business. Aim for the high end, have local offices, produce only budget cards or you can choose to run everything from Taiwan.

All business methods are valid – you just need to find the one that works for you.

KitGuru's sources tell us that Powercolor is doing particularly well with XPRODUCT into YMARKET using ZMETHOD. With the brand new 6000 series just around the corner, we wanted to get a better handle on this growing company. Andre Santos has been providing Powercolor with PR & marketing support for quite some time, so we put him in the hot chair and asked the burning questions.

How's it been going?
As the production lines slow down on 5870/5850, we asked Santos how his high end sales had been over the past 12 months. “We just could not get enough”, he said. “Supply was better on the 5770 and 5750, but even there we had many constraints on supply”.

So was that a plus or a minus? Santos says his engineers made best use of the situation.
Variety is the spice of life
“Well, demand was sustained for a very long time. That gave our engineers a chance to work on some special projects that we might not normally have had time for”, said Santos. We asked for specifics. “The variations have been huge. Just look at the options available for customers who want a 5700-class product. Powercolor has innovated a lot, offering Go! Green options for those who want reduced power consumption and greater efficiency, low profile 5750 cards for media centre applications, single slot 5770 cards when space is at a premium or maybe you want to slot 4 cards in one mainboard”.

And that was not the end of it, “We also have the PCS+ range which are factory overclocked using special coolers and settings. We actually manage to achieve a running temperature that's about 15 degrees lower than normal, while at the same time keeping noise under 30dBA. Having fat heat pipes really helps”, said Santos.

Santos smiles, “At the extreme end of the market, we now have a full line-up of Vortex products. Here the factory overclock is around 1Ghz and it takes a huge copper base to generate performance scores that are around 17% higher than a regular 5770 card. For Powercolor, Vortex means ‘no compromise' in design or performance”.

Getting rid of the hot air
We asked if it is difficult to get the right cooling solution for high end Radeon cards. “Not really”, replied Santos.

“We work with several suppliers, like Arctic Cooling and ZeroTherm, searching for the best solution for a specific graphics card. Each GPU is different, so the solution must change if you want to win”.

Our next question drew a thoughtful response from Santos. Traditionally, people associate Powercolor with the value segment, rather than innovation. Something seemed different in 2010, so what's new?

He continued, “We also had the PowerColor HD5770 Evolution, the world’s first cross-border graphics solution containing the on-board Hydra Engine. The HD5770 Evolution Edition enables the combination of any GPU from both parties, without any extra connector. For customers who want to drive multiple HD screens, we showed the PowerColor Eyefinity 12 and for the middle range, Eyefinity 5”.

Santos is really impressed with his R&D team, especially for high end overclocking solutions, “Our PCS+ series are consider by many to be one of the best solutions out there. Extremely quiet, cool and with lots of overclocking headroom for all the enthusiasts out there”.

Come on Santos, play favourites
We asked Santos what his favourite card is, and we were a little surprised by his answer. “My system is on almost 24×7 for work, but at the same time, I really care about the environment. My Go! Green HD 5750 is passively cooled and extremely efficient. Powercolor's production methods ensure strict adherence to the governing rules regarding electrical waste (e-waste) and an assurance that hazardous substances are reduced to a minimum(RoHS)”.

We like Santos. We like diversity. And we like the fact that Powercolor has provided its competitors with constant price pressure. In a year where there has been little competition from outside the Radeon family, Powercolor has been doing its part to ensure that 5000 series pricing remains competitive.

KitGuru says: We've heard that Powercolor will be sending more of its senior management team over to Europe from Taiwan, in order to maximise the company's potential for 2011. With all of this innovation going on, that's got to be a good thing, right?

Let us know what you think, below of in the KitGuru forums. 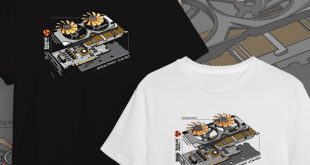 The KitGuru Merch Store is back with fresh new designs. We've revamped our threads, partnered with a new provider and better yet, we have a discount code for all our readers interested in picking something up.