This morning, every person involved in selling memory in the UK channel was sent an update from their suppliers to say, with immediate effect, all system memory will be jumping in price by at least 20%.

Ignoring the ignorant chit-chat, KitGuru goes straight to the sauce and gets the inside scoop for you on the situation.

Memory companies across the globe claim to be different. This claim was put under tremendous strain in the aftermath of the huge earthquake that struck Taiwan in September 1999. Overnight, memory prices quadrupled – for every supplier. Hmm… Different eh.

The disaster this time has been caused by a quake in the financials of one of Japan’s biggest companies, memory giant Elpida – and it’s CEO’s decision to put the company into voluntary administration.The stock market was as kind as you might expect and immediately wiped close to 100% off the value of Elpida shares, dropping from 247 Yen to bounce at 4 Yen.

In the DDR memory marketplace, the whole world dances to the Kingston metronome. Elpida is one of Kingston’s major suppliers. This morning, every serious player in the channel got a message to say that memory prices would soar by a minimum of 20%, with immediate effect.

So how bad could it get?

KitGuru’s sauces say that the 4GB memory that started the week trading around $16, could easily hit $25 in no time at all. That’s a price hike of almost 50%. Looks like today’s 20% hike is only the beginning.

Elpida has been slumping down for around 5 years and is now burdened with a $5Bn debt that it cannot shift. This has been the single biggest issue weighing on the mind of Elpida’s President Yukio Sakamoto.

Problem is that memory has continued to spiral down. Against that background of continual market/revenue/margin degradation – Elpida has continued to invest in amazing new plant and machinery. It’s a true innovator and has been backed financially by companies like Intel, NEC and Hitachi. However, even with all that help, Elipda itself seems to have failed to post a profit since 1999.

KitGuru says: This won’t be the last we hear about Elpida. The most immediate knock-on will be for Kingston (which will carry through to everyone else – Newton’s Cradle style). If it turns out that almost two thirds of its memory is produced by Elpida, then that will present a challenge – but not as big a challenge as if the rumours about Elpida subsidising Kingston profits are true. In today’s tough market, we can’t see anyone else stepping in to offer that kind of ‘marketing support’, so 2012 will be interesting all round. As we went to press with this story, we heard a rumour that cases of the world’s most expensive champagne have been orders for delivery to Samsung’s headquarters in Korea. But it’s just a rumour. 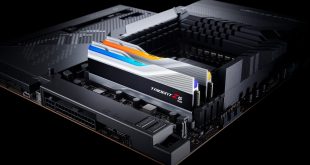 G.Skill keeps pushing the limits of DDR5 to new heights, this time by launching a …