Home / Tech News / Featured Announcement / What is motion sickness in video games and how can you prevent it?

What is motion sickness in video games and how can you prevent it?

It’s fair to say that video games have come leaps and bounds since the days of 8-bit and 16-bit graphics. The jump to 3D paved the way for more immersive worlds and an expansive range of  new mechanics to keep players entertained. However, this jump also kickstarted the increasingly widespread problem of motion sickness. Today we are exploring exactly what causes some gamers to suffer from motion sickness and what you can do about it.

What is Motion Sickness?

Motion sickness is caused when the visual perception of movement doesn’t align with the other senses, essentially meaning that what you’re seeing is not what you’re feeling. Although this traditionally stems from being at sea, also known as seasickness, or within a car, known as car sickness, motion sickness within video games is known as simulation sickness thanks to its origin within flight simulators.

Symptoms are often shared between all types of motion sickness, with the victim potentially feeling dizziness, headaches, heavy sweating, an excessive production of saliva and/or, most commonly, nausea.

Fallout 3 set a precedent for open world titles back in 2008 and while Fallout: New Vegas helped tide fans over, it wasn’t a replacement for the long-awaited mainline sequel. By the time Fallout 4 came around in 2015, many fans were disgruntled at the dilution of RPG mechanics, criticising the title for not being what they’d built up excitement for across the years. After just 24 hours of playtime under my belt, I was left with a much different feeling – my first experience with motion sickness. 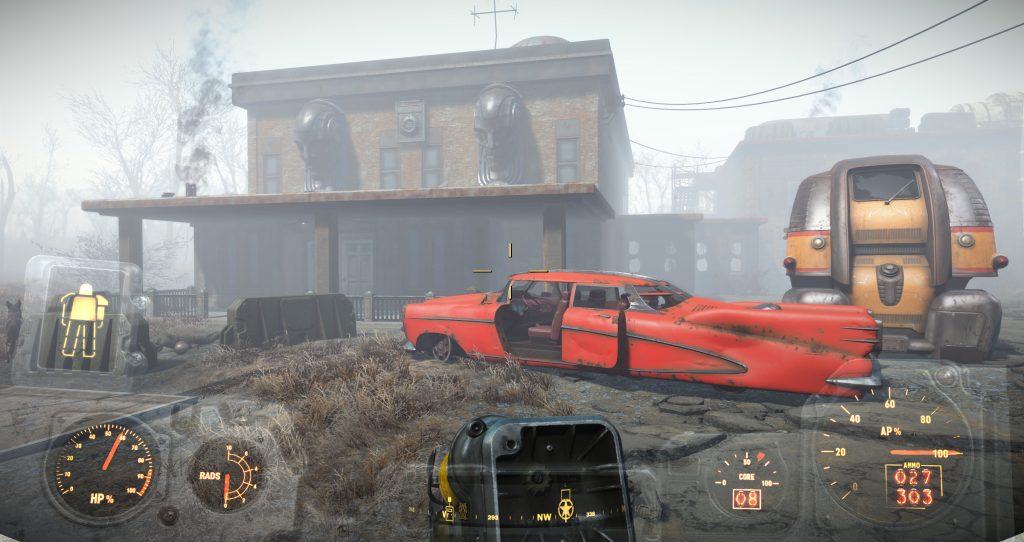 After every session with the Fallout 4, I came away feeling disorientated with a distinct headache and an odd shortness of breath. I felt embarrassed, as if this somehow took away my credibility as a gamer, especially since I was struggling to engage in conversation around one of the hottest topics of 2015. I simply couldn't maintain concentration long enough to absorb what was happening in-game. Due to this, I decided to leave Fallout 4 behind and I set my sights on Techland’s Dying Light as my next adventure. Despite hearing wonderful things about the zombie survival game, I got just 30 minutes in before motion sickness once again dawned upon me, ruining my experience.

The cause of Motion Sickness in video games

No single factor can be claimed to cause simulation sickness given the subjectivity of the player, however some mechanics are more common causes than others. Certain fields of view can give the user a sense of falling, particularly when set too low, however the biggest culprits seem to be certain camera movement and effects.

Head bobbing within games has become a common feature in first-person view, intended to simulate actual human movement. Unfortunately, this can be a cause of motion sickness that is often worsened if the game also places movement in the player’s weapon. Motion blur is another potential cause of motion sickness despite its hopes of making swift turns more authentic, thanks to the perceived shift in speed of objects leaving the player’s peripheral vision.

While games such as Guitar Hero have presented a more physical type of motion sickness than others, it's the growth of virtual reality technology that has truly brought the problem to the forefront of discussion. In both cases, the trouble is caused by movements that are made in game that may not exactly translate to those made in the real world.

Nowadays just about anyone can be affected, including viewers within the rising popularity of streaming services such as Twitch. If the player is moving the camera in unexpected ways, the spectator might feel that this is jarring, getting a spell of motion sickness as a result.

The best way to get past motion sickness is to not be deterred. While users are recommended to stop playing when symptoms appear, accompanied by fresh air and a glass of water, repeated sessions with the offending game can help those affected get used to the on-screen movements. Sadly, there’s no way to tell how long this process might take, or if it will work at all. It is certainly not the most comfortable solution.

Customisable settings are an affected player’s best friend, from the ability to turn head bobbing and motion blur off, to upping the field of view and adjusting the sensitivity of movement. It could be any of these that is causing motion sickness, so experimentation with settings is key. Unfortunately, some games prove more difficult to adjust given their lack of native options, meaning players might have to dig around within the .ini files or turn to mods to help them.

Even those unaffected by motion sickness should consider sitting further away from the display and adding more light to the room. Ensuring that the light source from the television or monitor is accompanied by a flood of light behind it is known to help reduce symptoms. Those intent on pushing past the current bout of motion sickness without a break, which is not recommended, can try to reduce fatigue by staring at a singular point, such as the horizon line on the screen.

Alternatively, there are plenty of make-shift solutions that supposedly help those suffering with motion sickness. Chewing gum reportedly helps, if not for its distraction then perhaps for its added movement to the player's head giving a sense of the movement seen on-screen. Wrist bands have been designed for motion sickness, specifically for those at sea. The pressure on the underside of the wrist helps to centre those affected, but this might provide a different type of hindrance to the player instead. Benadryl, Bonine, Dramamine or Meclizine are known to help reduce symptoms, however it is recommended that players proceed with caution when using any kinds of medication and be aware of the side effects.

If a player has tried everything discussed here without success in overcoming motion sickness, then it is recommended that they move on to another game that is perhaps less intensive.

KitGuru Says: Motion sickness is a tricky thing. For me, it came out of nowhere and luckily has only affected me on a handful of titles. I've yet to go back to see whether I can truly overcome my problems with Fallout 4 or Dying Light, but I will be sure to test these methods in the coming weeks. Have you experienced motion sickness while playing a video game? What games have affected you the most?