We had the opportunity to attend CeBIT 2017 yesterday and while we were there, we checked out as many booths as we could. We have already published our coverage of Antec and Deepcool but today, we are giving you the lowdown on everyone else that was there, including ASUS, Cooler Master and be quiet!.

First let's start off with ASUS. This year, the notebook team turned up but we could only spot one new model amongst the bunch. Some of these notebooks are geared more towards professionals or casual PC users while others are ROG branded and intended for gamers.

The Cooler Master booth was filled with custom PC builds this year, alongside displays of the company's liquid and air coolers, which we have seen before. One new thing that caught our eye was the MasterWatt 600 Lite power supply. This is rated 80Plus White, which as it turns out is a notch below Bronze on the efficiency scale.

be quiet! had some custom builds of its own on show at CeBIT 2017, two of which were using the Dark Base 900 case and another built around the Pure Base 600 chassis. We liked the Deadpool themed build in particular.

We also got a look at the upcoming Silent Loop 360, be quiet's AIO cooler built by Alphacool. There was also a Shadow Rock TF2 on display for fans of air cooling. The fins on this one have changed a bit and the heat pipes have also been arranged to connect differently to improve efficiency of heat transfer.

Ever since we reviewed the original Couchmaster from Nerdytec, the company has been working on ways to improve its design. From what we heard, the new design makes use of additional cushioning in areas to help improve comfort.

Thermaltake turned up to CeBIT this year armed with a ton of showcase builds put together by various case modders. One is based around TT's test bed frame, which used a Hello Kitty theme. Another custom build featured a fully liquid cooled system integrated into a desk, while another used a standard ThermalTake chassis.

Silence was showing a handful of new power supplies this year, with both modular and non-modular designs. This company is primarily targeting the budget PC market and while we didn't get all of the details we'd like right away, we are expecting news from these guys in the future.

One of these PSUs is rated for 80Plus Bronze EU, which is intriguing as we don't often see the EU label attached as many PSUs display ratings for 115V.

Our last stop of the week was Zotac, who had some GTX 1080Tis on display. We had hoped to see additional GTX 1080Tis from other add-in board partners but unfortunately most other GPU makers are still producing and don't have any custom models on hand to show off.

Zotac were able to show their Founders Edition card, along with the AMP! and AMP! Extreme custom versions. Clock speeds are unfortunately ‘still to be determined' which is disappointing but we should learn more in April, when custom cards finally start shipping out.

KitGuru Says: That just about wraps it up for our CeBIT 2017 coverage. Let us know if anything in particular caught your eye in the comments. 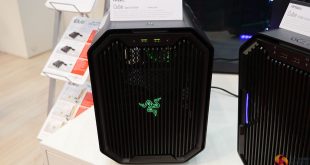 Our CeBIT coverage continues, we already had the chance to swing by the Deepcool booth …