When MSI launched the AG2712A All-in-One Gaming PC in conjunction with Team Fnatic back in April, it was considered a bit of a market leader in its space. The advent of Haswell meant the specification was updated and now, at Multiplay i49, MSI is showing off yet another specification update.

While the nVidia GTX670M is certainly no slouch when it comes to mobile gaming solutions, the Radeon HD 8970M has been launched as a direct cometitor to the GTX680M – a distinct class above the 670.

In desktop terms, the 8970M is close to a Radeon HD 7870 with a similar set of shader and texture units – alongside a clock speed that nudges 1GHz – with 2GB GDDR5. Mobile Radeon parts focus on features like ZeroCore which attempt to extend overall battery life by shutting parts of the GPU down when not in use.

Actual spec sheets were not on hand, but KitGuru’s representatives did manage to speak with MSI Technical Guru Joran Schoonderwoerd who pointed us in the direction of MSI’s official web site, where you can get full details on the latest iteration of the AG2712.

Here’s a shot of Joran next to MSI Marketing Guru, Jenny Wu at Multiplay i49 – with the AG2712A in the foreground.

.
KitGuru says: While we’re not ecstatic about finger prints on our screen, there’s no doubt that the addition of a powerful graphics processor like AMD’s 8970M will make this genre more appealing to hardcore gamers looking for something different.

Previous Zombies, massages and going retro at i49
Next Paul Butler from AOC demos 29 inch widescreen at Multiplay i49 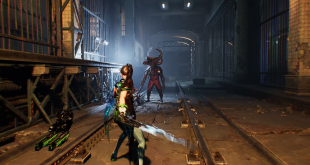 Sony’s 2021 PlayStation showcase brought with it the announcement of major titles, as well as …