MSI has launched its first fanless mini PCs with its Cubi 3 Silent series, featuring an aluminium design. Complete with an Intel Kaby Lake U processor, the Cubi 3 Silent and Cubi 3 Silent S aim to deliver both efficiency and power in a compact form factor.

Upgradability is at the centre of MSI’s Cubi 3 Silent series, suiting the needs of both consumers and businesses alike. Four screws located at the bottom of the chassis can be removed to access its M.2 Slot, 2.5” HDD and SO-DIMM memory modules. Both the Silent and Silent S ship with DDR4 2133MHz, ranging up to 32GB across 2 slots.

Given its miniature form factor, the Cubi 3 Silent series relies on Integrated Intel® HD 600 series Graphics, and seems to remove the ability to adopt a discrete GPU. Given that the device sports two USB 3.1 Type-A ports on the front, two on the rear and two USB 2.0 ports on the side (limited to Silent S version), it is unlikely to support external GPUs that more often than not utilise Thunderbolt 3 enabled USB Type-C ports. 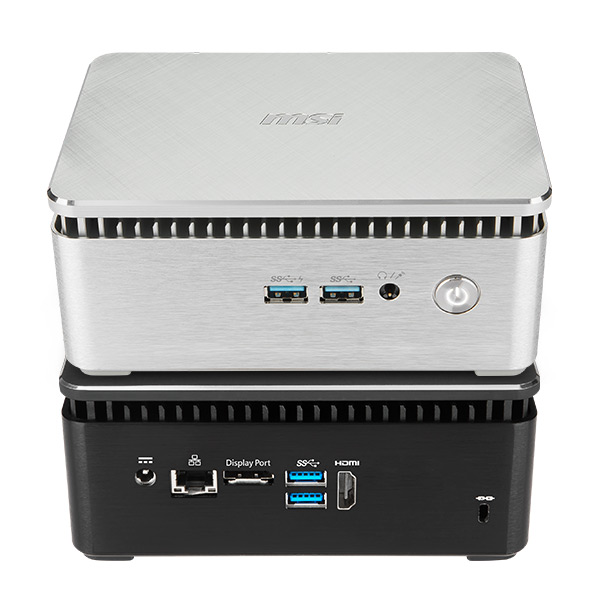 Its single DisplayPort, HDMI and Ethernet port can be used to enjoy ultra-high definition, which will also be dependent on the user’s internet connection if streaming the content. This makes MSI’s mini PC perfect for consuming the latest content on Netflix or showcasing high detail business presentations.

The aluminium design stretches from the outside in, with both the chassis featuring a sleek brushed metal look and the CPU heatsink presenting a sturdy aluminium layout to keep the mini PC cool without the use of a fan. Coming in both black and silver variations, the Cubi 3 Silent series can also be mounted via VESA standards to match any scheme or setup.

A black and a silver version of the MSI Cubi 3 Silent series are to be globally available by end of October 2017, but no mention is made of the Silent S release date.

KitGuru Says: Owning a desktop PC that has almost crushed me before with the amount I’ve moved around, I can definitely see the appeal of form factor builds but never indulged in one myself. What would you use this mini PC for?