Exosuit being trialled to search for world’s first computer

Did you think computers were invented in the 20th century? Don't make me laugh. 19th century? Come on. Try the 1st century BC, or there abouts, as that's what the Antikythera mechanism is considered to be. It's a (probably) Greek analogue computer from roughly 100 years before the birth of Jesus, found in the sunken remains of a Roman boat off the coast of the Greek island of Antikythera in the Aegean Sea. Previously divers have been down there for a few minutes at a time and even tried hoovering up the ship's contents with a giant vacuum, but now, with the birth of this Iron Man like exosuit, we can expect divers to spend hours down there – potentially unearthing the secrets of this unexplained device.

The reason the Antikythera mechanism is so impressive, if you haven't guessed already, is because it was so far ahead of its time. Technology featuring gears and complicated machinery like it does, wouldn't be seen again for well over a thousand years. It's thought to have been a device for measuring lunar and planetary activity, but such information wasn't particularly understood during that time period, making it even more of an enigma. 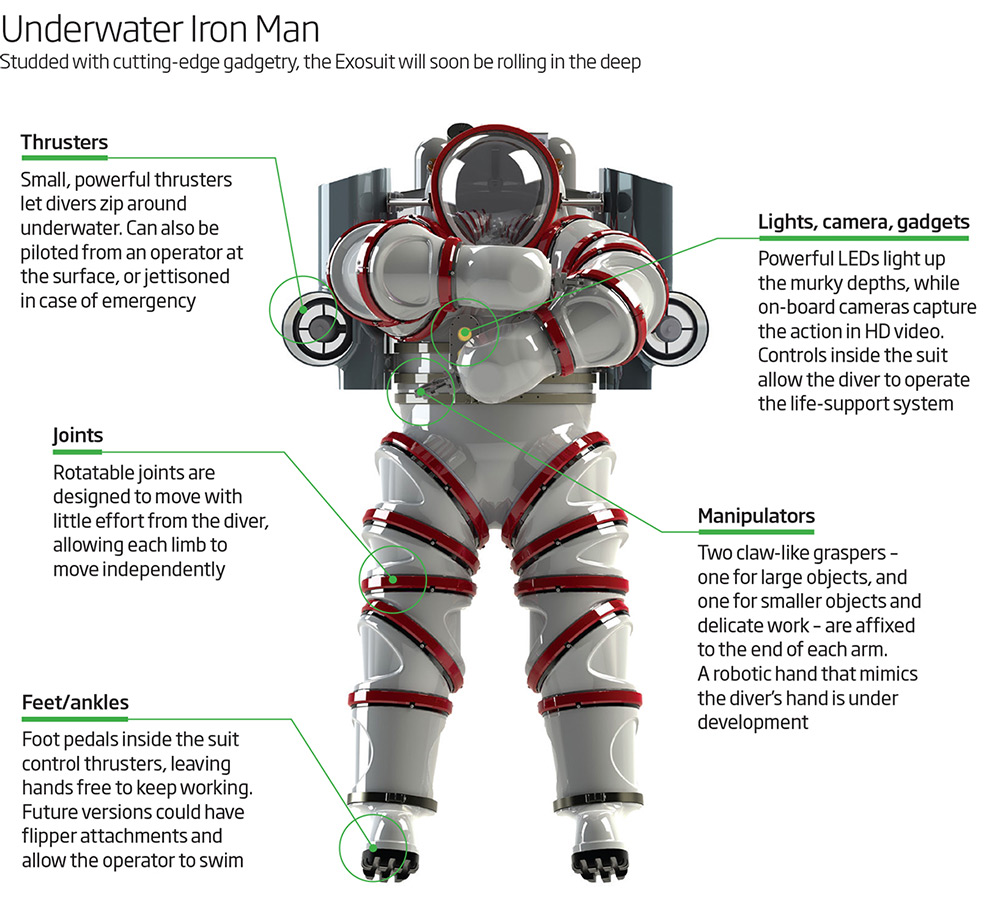 The suit that's being trialled in sea water conditions at the moment and will eventually be used to dive the ancient wreck, was initially designed to investigate New York City's water treatment facilities. It features foot powered thrusters for propulsion (thereby keeping the hands free), rotating joints for added movement, manipulation claws in the arms for gathering or examining large and delicate objects, and a mass of lights and HD cameras to record the best images of the wreck every taken.

Because the suit is solid however, it can maintain topside pressure at up to 300 metres, so the diver can spend hours exploring the wreck and come back up whenever he feels like, without any need for decompression.

“With the Exosuit, our bottom time becomes virtually unlimited,” says Brendan Foley, co-director of field operations at WHOI's Deep Submergence Laboratory. “Now we can have an archaeologist in the suit for hours, and we'll only have to come up to answer the call of nature.”

Admittedly all this fancy technology does come at a price. Built by marine robotic firm Nuytco Research from Vancouver, it was sold to civil engineering firm, J.F. White for $1.5 million (£890,000). With that in mind, it's no wonder researchers are only borrowing it, though they will be making some basic modifications to allow it to cater to archaeologists with different body sizes.

KitGuru Says: The suit is amazing in its own right, but I really am curious to see what they find on that ship. The Antikythera mechanism is a technological enigma, discovering anything about its origins would be a real boon to scientists and historians in a number of ways.