Motorola is apparently finally going to let potential customers customize the Moto 360 smartwatch, something that has been rumored ever since the device was originally unveiled. The Moto 360 has been added to the Moto Maker, Motorola's own customization suite that debuted with the original Moto X smartphone.

According to sources speaking with Wired, customers will be able to choose from three different colors and accents for the watch. According to the report, the experience will be similar to that of the Moto X when using the Moto Maker tool, allowing you to pick colors for the front, back and buttons. 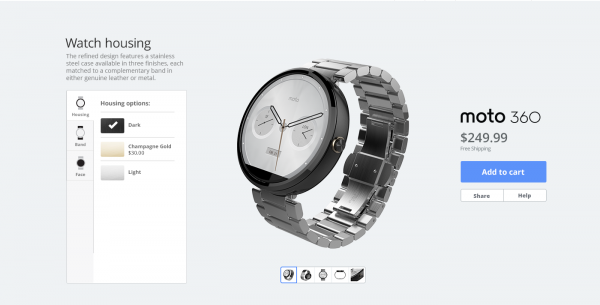 Engravings will also be offered for those who want to add a more personal touch. You will also be able to pick from metal and leather wrist bands. Wired has screenshots of the new Moto Maker page so everything seems to check out but Motorola has yet to confirm anything.

The Moto 360 released last year alongside the latest Moto X smartphone. It is currently the most popular Android Wear device available.

KitGuru Says: Moto Maker for the Moto 360 has been rumored for a while and was originally expected at launch. The level of customization may even make the smart watch more desirable. However, it may end up being limited to the US.