Earlier this week, we saw Bitcoin managing to hit the $10,000 value landmark. In the days following, it has shot up well past that number, with the cryptocurrency now sitting at $15,000 in value per coin.

Bitcoin crossed the $15,000 mark for the first time earlier today, marking another major milestone. Over the course of 2017, Bitcoin has been breaking records on a monthly basis, with value consistently creeping up. For reference, this time last year each Bitcoin was worth $766, so value has shot up at a huge rate. 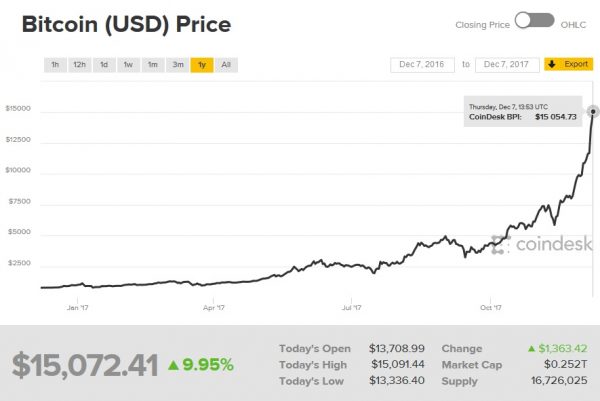 Bitcoin has been known to rise and drop in value over the years, the currency crossed the $1000 mark a couple of times in the past but this year has been the strongest yet. The meteoric rise hasn't gone unnoticed by government agencies though, with the UK and EU preparing plans to regulate the digital currency over fears that it is being used for illegal purposes.

The introduction of regulations and laws could cause Bitcoin to crash once again. For the time being though, it is going to make a lot of people a lot of money.