TED talks are known for making us think about issues in a different or deeper way and bringing ideas to the fore, but rarely are they something we've already been talking about for almost a year. However that's what happened yesterday with a TED talk in Vancouver, when out from the back rolled ex-NSA contractor Edward Swowden on a little robo-segway melded to the conference screens in Demolition man, to give a talk on his revelations and what they could mean for the future.

Controlling the robot and display from an undisclosed location in Russia, Snowden seemed to enjoy his presence there, particularly being able to roll around at will, however he also got serious when the topic of government intrusion was brought up, also condemning the fact that he had – in the eyes of the US government – been found guilty of crimes without trial.

While he said he wouldn't describe himself as a hero, Tim Berners-Lee, inventor of the World Wide Web was more than happy to do so. 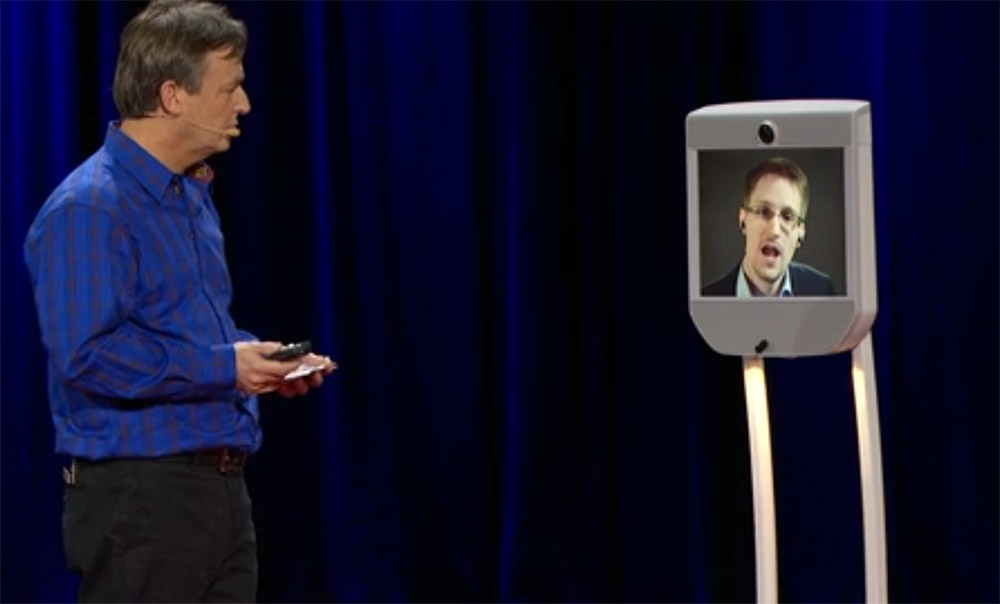 Snowden talked through a lot of his revelations, explaining some of the finer points of government actions

“Rights matter because you never know when you’re going to need them,” Snowden said, going on to say that everyone should be able to text or call their loved ones, without a government listening in and potentially using that information against them in the future. People shouldn't spend their lives worrying how their intentions could be misinterpreted, he said.

He also talked about “Terrorism,” not necessarily the act itself, but the word and its connotations. It's a “cover for action,” he said, since it was so emotive. It's been used countless times before to justify certain actions and has been one of the reasons the NSA and GCHQ have given for theirs, but neuter PRISM nor Tempora has stopped a single imminent terrorist attack.

Perhaps the worst part of the whole thing though, said Snowden, was that all of this was done in secret. It was done without the public's knowledge, without the permission of congress and often without even the go ahead from intelligence oversight committees, the very people that are supposed to keep an eye on NSA activities.

When asked for their opinion, the crowd was pretty one sided. A few hands were raised at the idea of Snowden being a traitor, but when questioned if his actions were righteous, the crowd applauded.

“We need to encode our values in the internet,” Snowden said and everyone who has experienced the internet as it has been over the past two decades, in a free and open form, should champion this too. “It's up to all of us to protect [these freedoms] … to preserve that liberty for the next generation.”

KitGuru Says: Snowden does a good job here of shooting down the “if you've done nothing wrong,” argument, as well as outlining plans for the future for an internet “Magna Carter.” It's a great watch if you have a few minutes.