Home / Channel / How do you feel about crowd funding campaigns hiring PR firms?

How do you feel about crowd funding campaigns hiring PR firms?

One of the biggest differences between most successful crowd funding campaigns and those that fail to reach their goals, is professionalism. It's a polish and the look and feel of a company that will deliver their product on time, and have it look and operate like they claim. Part of the reason some of those companies look so good though, is because they hire a PR firm to help them.

That sort of thing rubs some people the wrong way.

Crowd funding has had a big impact on many aspects of our world. From being a common place sighting online, to helping a resurgence in board gaming, to giving those with no traditional funding options a chance to develop their dream project. Kickstarter, IndieGoGo and others have helped thousands of people realise their dreams and many more buy up products that they never knew they wanted.

But what if those people or companies already have some money and instead of investing it in their project, they hire a PR firm to help them earn more from through crowd funding?

To try and find out a little about the role of PR in crowd funding, I reached out to Dynamo PR, a company which claims to be the most successful firm of its kind, dealing with crowd funding campaigns. In-fact it recently announced that over 50 campaigns, it had helped its clients generate some $30 million (£24.3 million). 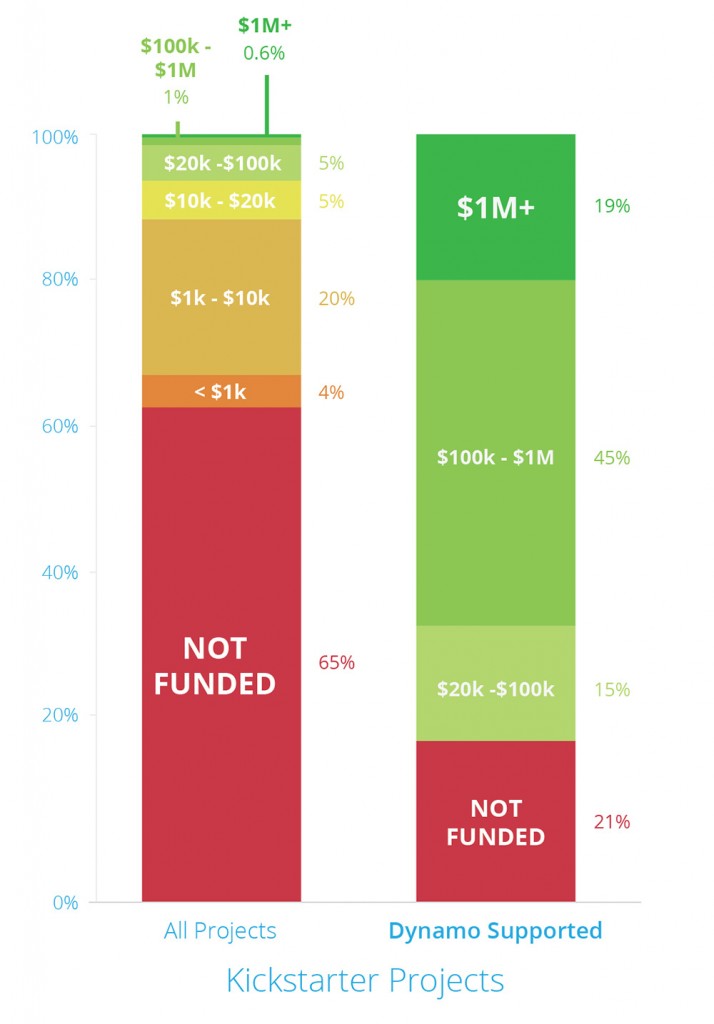 Dynamo claims a near 80 per cent success rate on its projects.

Dynamo has clearly done a good job promoting the companies it works with, as you've no doubt heard of some of them, even if you haven't backed them yourself. Remember the 3Doodler? Or the M3D printer? What about the FOVE VR headset?

“Not every crowd funding project is for a bedroom dream,” said Dynamo's Ellen Powell-Chandler, when I asked her about my misgivings about money being spent on PR, instead of the projects a campaign is requesting money for.

“But we are very careful who we take on,” she said. “We discuss with them to make sure we know where we're at in terms of investment. Although it sounds cheesy, we want our clients to see the crowdfunding process as more of a journey.”

That journey appears to be a successful one. Compared to the relatively rare occurrences of million dollar+ campaigns, Dynamo has helped clients achieve that much more frequently. It also has a near 80 percent success rate with its clients on Kickstarter and IndieGoGo. 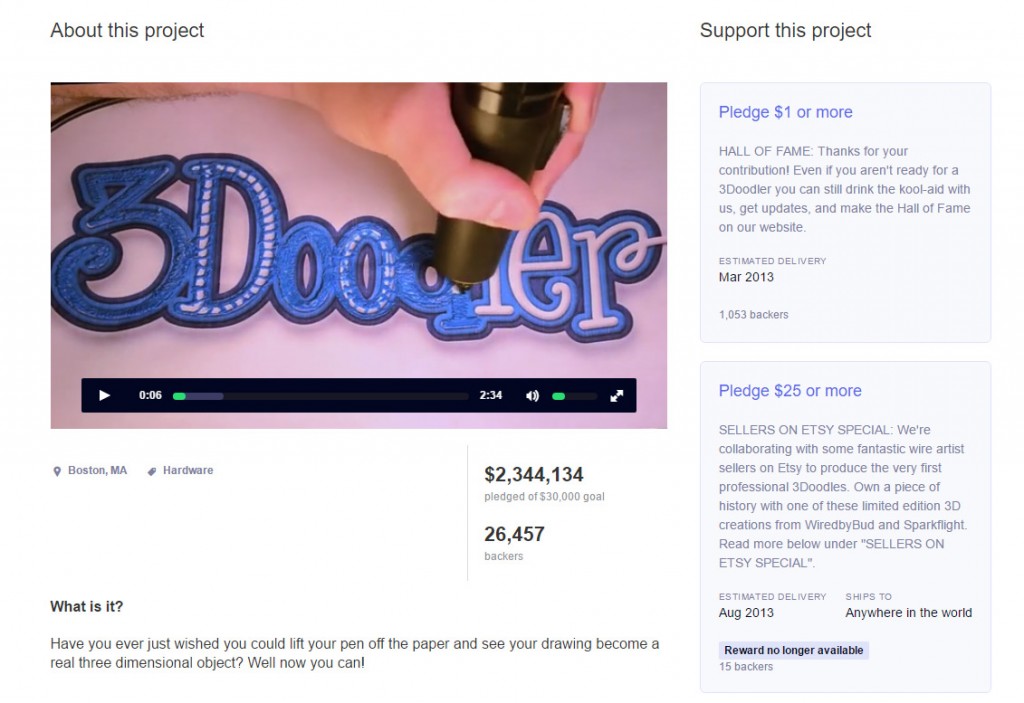 Of course Dynamo does pick and choose its clients and you could argue that the fact these companies are going into the project with a little money to start with, makes them more likely to be successful.

While the idea of companies like that going through Kickstarter initially left a sour taste in my mouth, Dynamo sees things differently.

Dynamo loves the crowd funding process, even for companies which already have some financial support, because it brings them closer to their fans. “Our clients listen to their consumers,” Powell-Chandler said. “They take on board feedback for colour schemes, product features. That sort of community feedback is invaluable.”

That is of course one of the big pros of crowd funding. While we have seen many companies go overbudget, or take an inordinate amount of time to deliver to their consumers, the idea behind crowd funding is that these firms should take their cues from their fans, rather than external investors.

Crowd funding campaigns tend to be much more personal too, though hiring on a PR firm to help with a professional image is a double edged sword. On one hand it means that a company looks more professional and is therefore more likely to secure interest from wary backers, but then that may give a more professional look to a company than it has naturally, which could be seen as a little dishonest.

While Dynamo does put differing amounts of work in on a case by case basis, it does often do pre-launch work with companies, helping them build communities and a brand before the campaign starts, letting them hit the ground running when it does launch.

Regardless though, Powell-Chandler did state that Dynamo, “puts its all into campaigns. We really want our clients to be successful.” As often as possible, they meet the product makers in person and try out whatever prototype they have, to get a feel for the product. 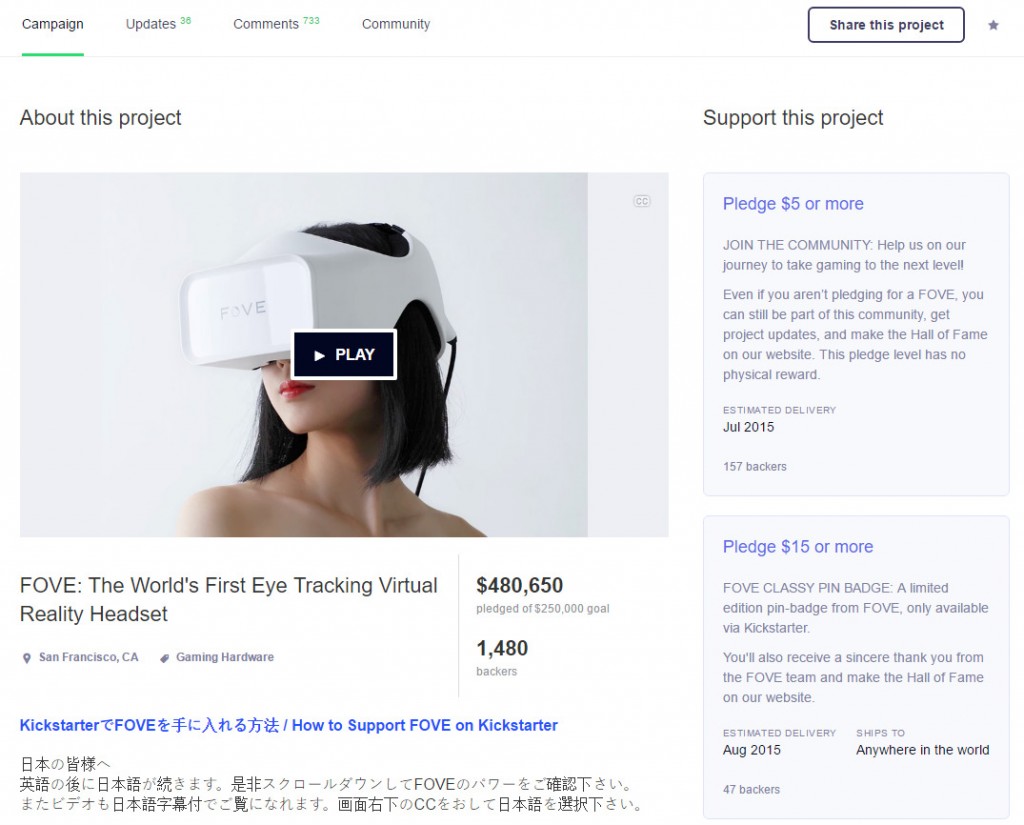 It really depends on what the client needs and what they are willing to spend. Unfortunately Powell-Chandler wasn't willing to disclose any direct sums that Dynamo charges for its work, though she did say they were options for fixed payments for specific work, as well as percentages of sums raised in others.

That money can cover post-campaign work too, as well as relaunching it should the occasional project fail and Dynamo believes a new strategy could reinvigorate it, as well as ongoing management during the campaign, should the product developers need to target a new social circle or online audience. Powell-Chandler was clear though that the company would not take on anyone who it felt wasn't a good fit for crowd funding.

Dynamo also makes a point of not doing anything hands on with the campaigns. It makes sure that the people running the campaign and interacting with fans and backers are the people who run the company and the people who will be responsible for fulfilling pledges. It really drives home the personable aspect of crowd funding, which is what has drawn so many people to it over the years.

Ultimately, from what Powell-Chandler said, it feels like Dynamo is of benefit to a lot of campaigns. Perhaps it was naive to assume that most campaigns on crowd funding sites would be bedroom hackers just looking to catch a break, instead of a mix of that and companies with a brand new revenue stream to exploit.

While personally I still prefer crowd funding campaigns that help the former group get ahead, I must admit that I am always more likely to back a polished looking company and if PR firms like Dynamo can help the little guy look good enough for me to back them, maybe that's not such a bad thing.

KitGuru Says: I'm still not entirely sold on the idea, especially when it comes to companies which already have funds of their own, but even then, making them beholden to their customers is a good thing. How do you guys feel about PR firms helping out with campaigns?

Previous Fan config: Does it matter? Testing push vs pull vs push/pull
Next Edifier CineSound B3 Soundbar Review