Matrix like stomach bugs could perform surgery in space

One of the most horrifying parts of The Matrix, wasn't that we were being grown and harvested like cattle, in a situation that makes you wonder, “why not just use cattle?” but that if you gave the robots any problems, the agents would impregnate you with a little, belly button robot that squirmed around inside, tracking you and no doubt giving awful heartburn. Now though, we may need to get used to the idea of a robot entering us through our umbilical scar tissue, as NASA is working on a robot that could help perform surgery in space.

With plans for much longer missions into space planned over the next couple of decades, the risk of major medical problems occurring to astronauts goes way up. There are many problems associated with a year plus round trip to Mars, but one of them is the health of the astronauts. While bone and muscle mass retention needs to be a daily grind, what happens if someone is tens of millions of miles away and suddenly develops appendicitis? That's where the stomach surgeon-bot comes in. 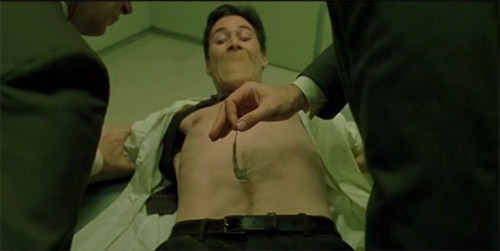 Agents are an optional extra

Developed by Virtual Incision in collaboration with NASA's Human Research Programme, the bot will work by entering the patient through the belly button, taking all the necessary tools for cutting and extraction inside with it, rather than with keyhole surgery, which leaves all but the tool-heads outside of the body. With the majority inside, the tail of the device will be left hanging out, so as to provide a closed seal and prevent the leaking of blood and other fluids, which in zero gravity become problematic. That seal will also prevent the release of CO2 gas, which will be vented into the abdomen to improve visibility.

But don't worry, that robot isn't acting of its own free will, it'll be linked up remotely to a surgeon, either on Earth, or if the distance and delay is potentially too great, it could be handled locally – either way though, by performing internal surgery, it's less messy and requires less surgeon dexterity.

To make sure this system works in space, it's being tested in a parabolic flight next year and if all goes to plan, it could be introduced into future space craft and possibly the International Space Station in the future.

KitGuru Says: I'd be pretty freaked out letting this thing into my body. They'd have to knock me out or I'd be sat there waiting for it to burst out like a Xenomorph offspring.