While the average PC enthusiast, gamer, tech-head or whatever you call yourself, is more likely to find themselves in a flame war than a shoot out, it’s still good to know that those that do spend their time having hot pieces of metal shot at them may soon find it much easier to survive being hit. A new piece of technology known as the XStat syringe from RevMedx is purportedly capable of plugging a bullet wound in seconds, preventing life threatening blood loss and keeping you alive long enough to get some serious medical attention. 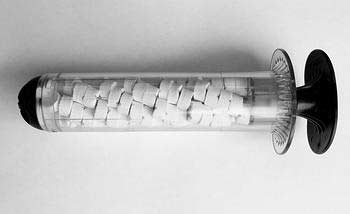 While more traditional implements like improvised tourniquets are still recommended for extremities and appendages, when the wound is somewhere that’s difficult to clamp or apply pressure to, the XStat syringe could potentially be a life saver. Each one is filled with compressed sponges coated in coagulant, which when injected into the wound expand, causing pressure that helps stem blood flow and when combined with the coagulant, are able to significantly stop blood loss, if not completely.

According to the Wired report, developing the applicator for the sponges was the hard part and RevMedx turned to a different firm, Ziba, to help out. Ultimately a type of syringe was created that could be operated one handed and with a silicone tip that tears when the plunger is depressed, it keeps the sponges dry until they reach their target.

The only downside to the whole method is removal of the sponges, which has to be done manually by a medical officer down the line. A bio-degradable version is being developed, but that’s a minor concern considering this has the potential to save real lives. So much so in-fact that the US army has already taken out a near £3 million contract with the developers.

Kitguru Says: This is a great idea and puts us one step closer to the one-stop, spray-on fixes we’ve seen in sci-fi movies for years.