Travelling around the Underzee in Failbetter Games' Sunless Sea is never a simple matter. There's monsters to avoid, caverns to navigate and the ever present danger of your crew eating one another when supplies run low. But at least you don't have to worry about giant, ray-like creatures that look like they could swallow your ship whole without even noticing.

Something like that makes its presence known in the new dev. video for upcoming update: Zubmariner.

In the Zubmariner expansion of the original top down, explorative roguelike, players will be able to take their surface vessel under the “zee,” surface with a simple upgrade to their vessel. When down below they'll get to explore the ocean depths, finding all sorts of weird and wonderful things. While the floor might keep you safe from anything below though, it leaves you open to what's then above you, like giant, giant monsters.

Although we don't see one directly in the latest developer diary for Zubmariner, we do see its shadow projected onto the ocean floor around the player and it dwarfs his ship. The player in this case doesn't seem too concerned, but does suggest that he won't spend much time around there, perhaps with good reason. 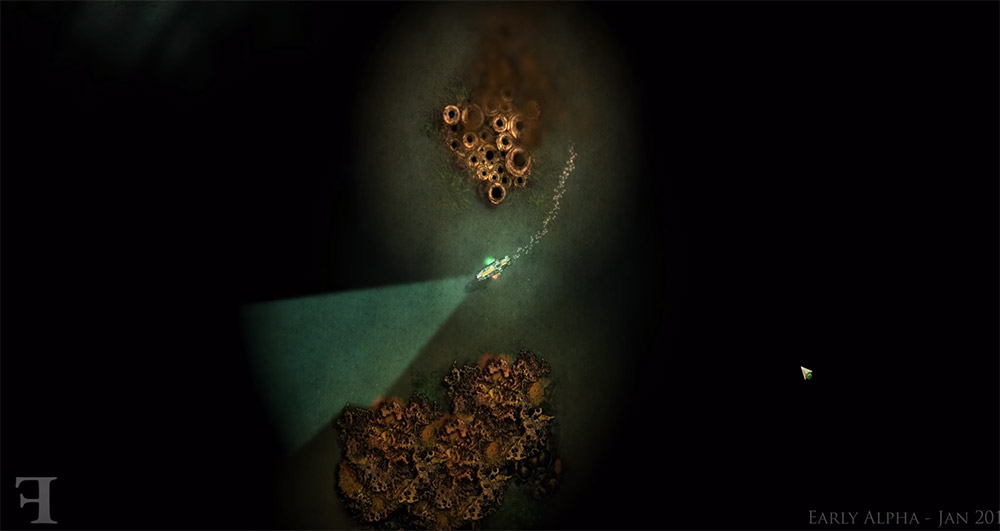 Spend enough time down there, and even the hydrothermal vents can look like eyes in the deep

The rest of the video tends to focus on some of the visual cues that are found when exploring the ocean depths, like bubbles trailing the ship, a stronger light source to help navigate and plankton that can give you an idea of how fast you're going when there are no reference points.

The Zubmariner update is still in an early-alpha state, but is expected to arrive later this year.

KitGuru Says: I need to take another crack at Sunless Sea. I managed to get a second generation in after 20 or so hours and the kid was set up quite nicely with a home and heirlooms. I should have let the map reset though, it's more exciting discovering where everything is.