More than a million people have signed a petition calling on Yahoo and its executives, to ban the sale of ivory on its online auction platforms in Japan. It points out that with Google and Yahoo refusing to allow ivory to be sold on their services, Yahoo is one of the last remaining major online players facilitating its sale, which in turn encourages poaching, it claims.

Although Yahoo does not directly own Yahoo Japan, it does own a 35 per cent stake in it, so does have some pull with how it's run. However the petition (warning, graphic image) urges Yahoo to leverage whatever influence it can to halt the trade, hitting out on an emotional level, as well as a threatening one.

It reminds Yahoo exclusives like CEO Marissa Mayer that Yahoo is losing employees at an alarming rate, and that may only accelerate if publicity around how complicit Yahoo is in the sale of ivory products. Most of them are said to be personal seals which are seen as a status symbol in Japan, though there is a wide range of products available, some selling for a few pounds and others thousands. 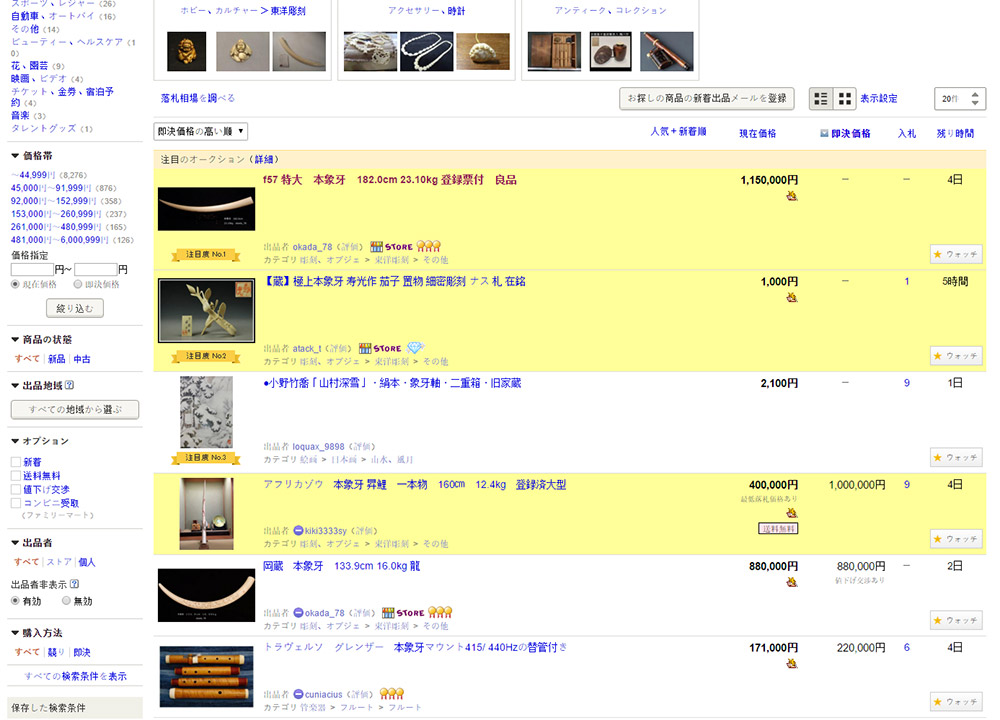 A quick search on Yahoo Japan's auction site for “象牙” turfs up a lot of results. That top tusk is going for £6,700.

Despite threats though, Yahoo has attempted to distance itself from the Japanese entity, claiming little responsibility in its actions:

“Yahoo, Inc. is an investor in Yahoo Japan and does not have controlling ownership. As such, Yahoo Japan determines their own policies and we refer you to the Yahoo Japan team for comment regarding their policies,” said a company spokesperson in  statement.

They did however clarify that Yahoo did not support the sale of ivory or its harvesting from live animals. Yahoo Japan on the other hand merely claimed to allow the sale of ivory from legal sources, such as antiques and sales of stockpiled ivory. It also claims to be dilligent in removing products which it feels are made from illegally obtained ivory.

It is those loopholes that other Japanese retailers have used to continue selling ivory, despite the international ban on its trade since 1989, which Japan did agree to (as per Wired).

KitGuru Says: As much as I think the international Yahoo wouldn't allow sales of ivory like this, it doesn't have much sway over Yahoo Japan. I can't see the latter changing its ways over an online petition, as noble as it is.