Forget ancient water, Mars may have flowing water on its surface now

Mars has long been thought to have once been a lush, green world with ancient oceans, lakes and rivers flowing across its surface. However those days are long gone and though there is evidence of ice, until recently the idea of flowing water on Mars was just a pipe dream. But NASA has now released data that suggests there may well still by rivulets of liquid water flowing very close to the surface of the red planet, with images showing dark stains indicating water flow on the side of a Martian canyon. 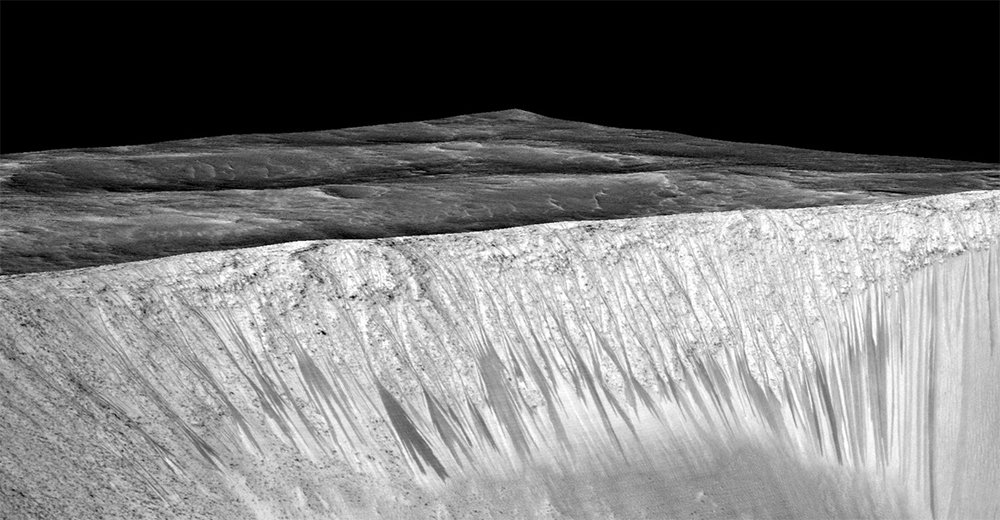 Although there has been some evidence in the past of liquid water on Mars, this is the most concrete yet found, with the stains suggesting a summertime flow of water, stretching hundreds of metres down the sides of the canyons. It’s not clear at this time where the water comes from, but it’s suspected that it may come from underground aquifers, bringing briny water to the surface in the summer.

Flowing water on Mars has many big implications for the planet. It suggests that there may be a greater chance of discovering life, with NASA interested in following the stains to their eventual depository, where we would stand the greatest chance of finding biological organisms. However, current Mars rovers are not sterilised enough to approach any potential hotspots for life, on the off chance that they contaminate anything before it can be adequately studied.

The other exciting potential for water that is easily accessible on Mars, is that it makes colonisation much more viable. Not having to extract and melt ice water, nor bring huge quantities with any future manned missions to the planet, would make the whole endeavour far easier. Refuelling could also be possible through hydrogen extraction and oxygen created from it too.

KitGuru Says: This is big news. With further evidence, future rovers may be further sterilised to make it possible to investigate the content of such liquid water and its eventual settling point. Who knows what we’ll find.