NASA’s Juno probe successfully made it into Jupiter’s orbit

The NASA Juno satellite which left the confines of Earth’s atmosphere five years ago, has completed its retrograde burn to bring it into Jupiter’s orbit. Although there was some concern that the radiation belt surrounding the gas giant could cause damage to the space craft during its approach, the orbital insertion went off without a hitch.

Juno was initially launched in August 2011, with plans to put it into a polar orbit around Jupiter, where it would look to study the planet’s magnetic field, gravity field and elements of its presumed dense core. Juno represents the second orbital craft to reach Jupiter, with the Galileo probe operating there between 1995 and 2003 (thanks BBC).

Juno is expected to stay in orbit around Jupiter for at least the next 20 months, at which time it will have completed 37 orbits of the planet. As it stands it requires one more burn before inserted into the correct orbit. That will be achieved with a secondary burn on the 19th October later this year. 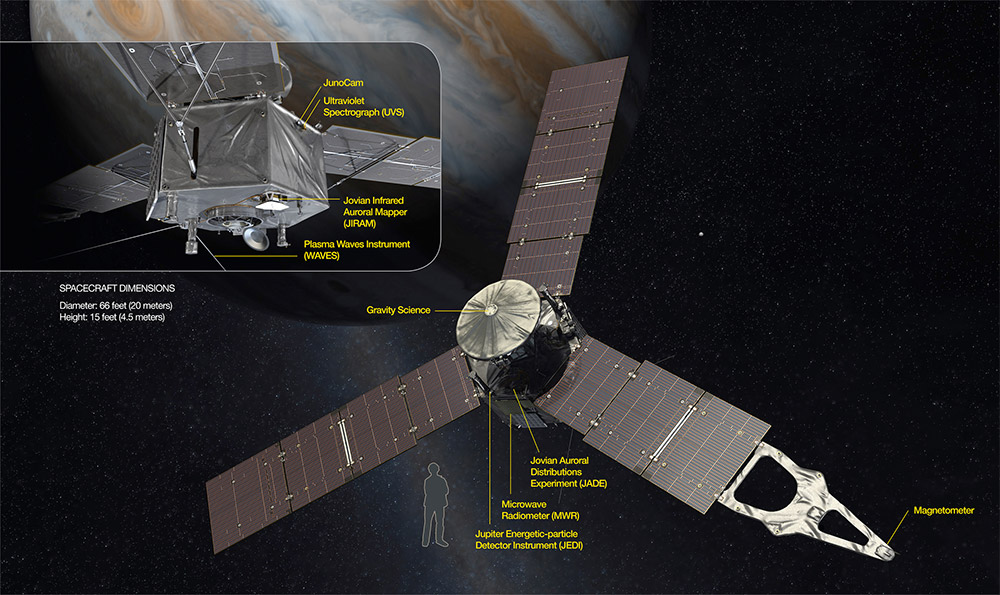 Artist’s rendering of Juno and its instruments. Source: Wikimedia

From there, infrared and microwave instruments will be used to take many measurements of Jupiter, providing us with a much deeper understanding of the planet’s composition and how it may have formed in the first place. It will be able to take these readings within just a few thousands kilometres from the edge of Jupiter’s atmosphere, far closer than any other craft has ever travelled to the gassy world.

There is a lot of speculation about what it may find there, including whether there is a large body of liquid metallic hydrogen, which is thought to be responsible for the massive magnetic field that surrounds Jupiter. Some scientists are also hopeful we’ll learn about Jupiter’s “Great Red Spot,” the storm that has raged somewhere within its atmosphere for hundreds of years.

KitGuru Says: Nothing has made me appreciate space ventures like this more than playing Kerbal Space Program. The difficulties involved in building, provisioning and handling the orbital mechanics of space craft in that cartoonish setting are hard enough. Doing it with real world physics and problems must be so much more difficult.