The PCI SIG has been developing external PCI Express interconnection for over three years now, but only later this year the organization will finalize the specification of the technology. The new cable will compete against Intel’s Thunderbolt 3. While the tech makes a lot of sense for various devices, it may not be adopted by the industry widely.

The OCuLink 1.0 technology will offer four PCI Express lanes with data rates starting at 8GT/s [gigatransfers per second] per lane as well as up to 4GB/s of peak bandwidth, which is similar to PCI Express 3.0. The initial version of OCuLink will use copper cables, but in the future PCI SIG may adopt optical cables for the technology. The OCuLink spec will be finalized this fall, reports EETimes citing the head of the PCI SIG.

The technology has headroom to scale in the future, hence, when PCIe 4.0 is finalized by 2017, the OCuLink will also gain performance. It is unclear at what point will the tech adopt optical cables, but it is highly likely that after 2017. 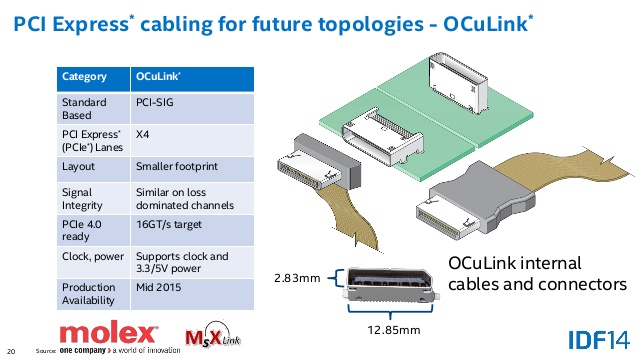 The OCuLink has been in development for many years and right now it seems to be inferior to Thunderbolt 3, which supports maximum bandwidth of 40Gb/s (5GB/s) and uses industry-standard USB type-C connector. The OCuLink can theoretically be cheaper than Thunderbolt 3 since it does not require a proprietary controller. However, since it uses a new connector, it is unlikely that PC makers will be inclined to integrate it. Perhaps, makers of servers and telecommunication equipment will be more interested in external PCI Express bus. Alternatively, OCuLink could be used to connect internal components of PCs to mainboards (e.g., solid-state drives). The OCL cables look considerably thinner than SATA Express and should not be too expensive.

KitGuru Says: It looks like semi-proprietary Thunderbolt has managed to win the battle against open-standard OCuLink by simply entering the market earlier and adopting an industry-standard connector.