The main difference between the two chips is their clock-speed for x86 cores: 3.70GHz/4.0GHz (default/maximum Turbo Core clock-rate) for A10-7850K and 3.50GHz/3.80GHz (default/maximum Turbo Core clock-rate) for 7700K. Both chips feature FM2+ form-factor and are drop-in compatible with the latest mainboards featuring such socket from leading manufacturers. As usually, “K” versions of AMD microprocessors feature unlocked multipliers and are better suited for overclocking. 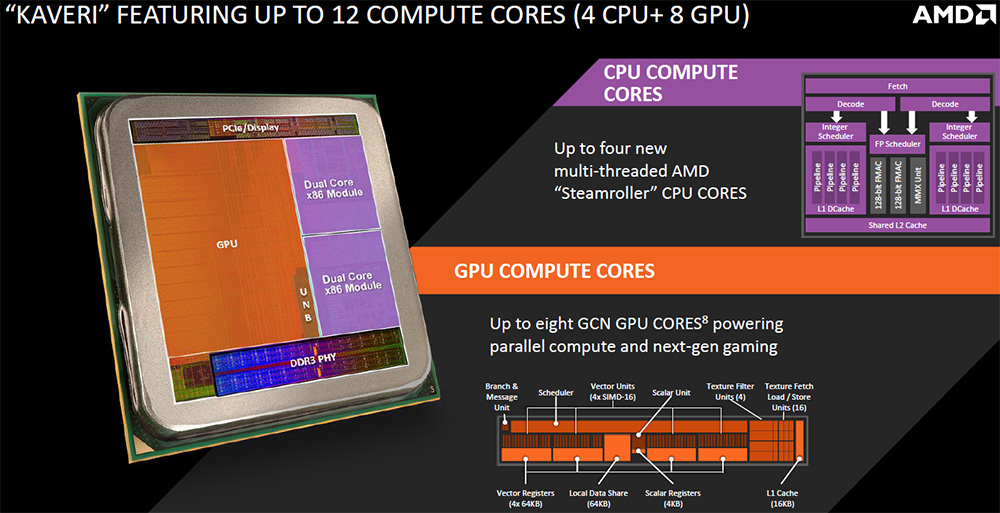 Thanks to the fact that AMD’s “Kaveri” features HSA technology, heterogeneous unified memory architecture (hUMA) and heterogeneous queuing (hQ), software applications can use both x86 and graphics compute cores at the same time and very efficiently. According to AMD, its Kaveri APUs can run up to 12 separate processes simultaneously thanks to the fact that it has twelve compute cores. Besides, the new APUs supports AMD’s latest technologies, such as Mantle, TrueAudio and so on that will improve performance and quality in select video games. Finally, AMD “Kaveri” comes with improved second-generation VCE and fourth-generation UVD [unified video decoder] units that improve quality of video playback and add encoding to new formats (to support 60GHz wireless displays, for example).

The latest APU from Advanced Micro Devices are made using 28nm SHP [super high performance] process technology at GlobalFoundries, which AMD calls “APU optimized”. The manufacturing process, which is tailored for high transistor density, let AMD integrate 2.41 billion of transistors into a 245mm2 Kaveri die, which is 85% higher transistor budget than that of previous-generation Trinity/Richland APUs (246mm2, 1.303 billion transistors, 32nm SOI). The undesirable effect of increased transistor density is a drop of Steamroller cores’ frequency, which has a negative impact on performance in traditional (non HSA-optimised) applications. The Sunnyvale, California-based chip designer hopes that lower clock-rates of the code-named “Kaveri” compared to predecessors will be offset by up to 20% higher IPC [instructions per clock] performance of the Steamroller micro-architecture (vs. previous-generation x86 technology from the company).

According to AMD’s internal performance tests, the new AMD A10-7850K “Kaveri” accelerated processing unit is 24% – 87% faster compared to Intel Core i5-4670K in synthetic applications like 3DMark or PCMark. This, however, does not mean that the new chip will be faster in real-world tasks.

Other versions of AMD “Kaveri” APU, including those for laptops, ultra-thin notebooks, low-power desktops and even servers will be available later this year.

KitGuru Says: Potentially, AMD’s new accelerated processing units with HSA technology can revolutionize computing in a big way. One of the problems is that Kaveri may not show decent speed in popular programs today (especially those that rely on single-thread performance), something that will negatively affect market performance of the new chip right now.