While the BitFenix Shadow will take any sensible build up to its physical limits of 30cm for your graphics card and an ATX mainboard, we wanted to be able to compare heat etc across multiple cases.

With that in mind, we used the same component selection that we used on our recent BitFenix Comrade build.

Essentially, this is based around an AMD 6800K and an MSI Radeon R7 250 graphics card running off a very affordable Seasonic power supply.

As you know, the AMD chips tend to run a little warmer than their Intel counterparts, so this gives you an idea on how the chassis will deal with most CPU thermal situations. 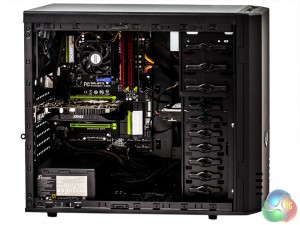 Building with the BitFenix Shadow is straightforward as there is plenty of room to move around inside the chassis – and cable routing is also very easy.

Of the latest chassis we’ve seen from BitFenix, the Shadow is also the most aesthetically pleasing.

Not only is the design smoother on the outside, but the structure hangs together better on the inside. We went with the straightforward build, using affordable components, but you can see from these BitFenix promo shots how easy it is for a case like this to accommodate a much more complex build.

Once you get past the packaging and foam protection, you will notice that the plastic bag that the chassis comes in is not only very heavy duty, it also has anti-static properties.

If you’re building for yourself, then this will be less of a feature. But if you plan to build an expensive rig and then ship it to someone else (customer, friend or family member), then protecting the surface from scratches and your components from static will be much more important.

While it is easier to build and cable neatly than, say, the BitFenix Comrade – there are still some small niggles.

One good example of a place where BitFenix can improve is to include a little extra space at the top for the 12v mainboard cable to come through the back – allowing for the neatest integration possible. We routed OK, but one or two more cut-outs would have helped us achieve a higher state of tidiness. 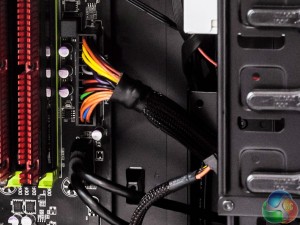 Another small niggle comes up when you try and fully populate the drive bays.

Most of them are fine, but if you did want to fit a 7th 3.5″ drive, then you will find your access is blocked by the nearest fan.

The quick release mechanism is a cool feature, but it only allows you to fix a drive in one position, so you can’t manoeuvre around the fan block on the 7th bay. Again, this is a relatively small niggle and won’t have much impact on our final analysis. 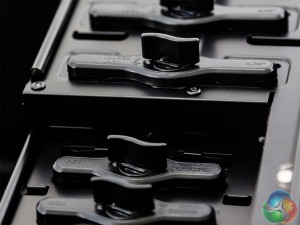 The overall manufacturing quality is much higher than you would find with typical budget cases. The whole product is well manufactured and there are no sharp edges anywhere.

You can see this with a close up of the PCI slots at the back – both when they are empty and occupied. 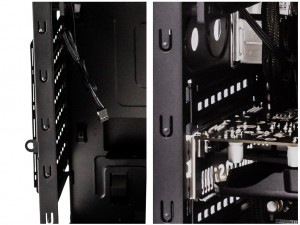 While our temperature tests showed that a sensible system, integrated intelligently, would pose no thermal issues – BitFenix has given you plenty of options for additional cooling if you think it’s necessary – in the front, next to the power supply (at the bottom) and up near the 5.25″ bays for example.

We’ve pushed the brightness up on this shot, so you can see the airflow options in/around the front panel. 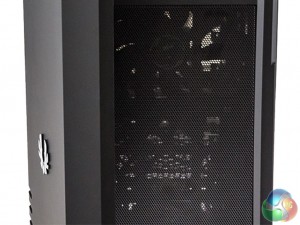 The side panels are very sturdy and the whole design feels solid.

Alongside the manual, screws and cable ties, you will also find some rubber grommets – which can be handy for additional noise suppression.

While it may not be the most glamorous chassis on the market, it has a functional efficiency that we find appealing, so – in that respect – it is very much in the Fractal Design camp of ‘less is more, just as long as you do it right’. 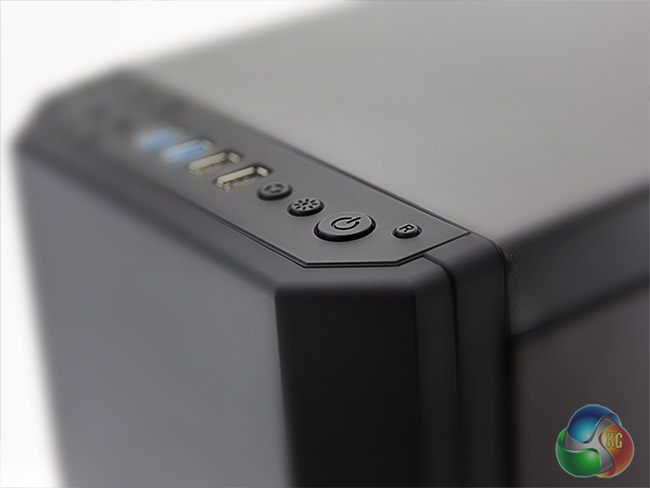 The top control panel also allows you to choose red, blue or off for the integrated LEDs. Given the popularity of nVidia and The Borg, maybe adding green would have been a nice touch.

In fact, Fractal is the manufacturer that most comes to mind when you’re assembling the BitFenix Shadow – and that is a compliment.

While the case itself is completely different, it gives you the same sense of confidence and satisfaction. 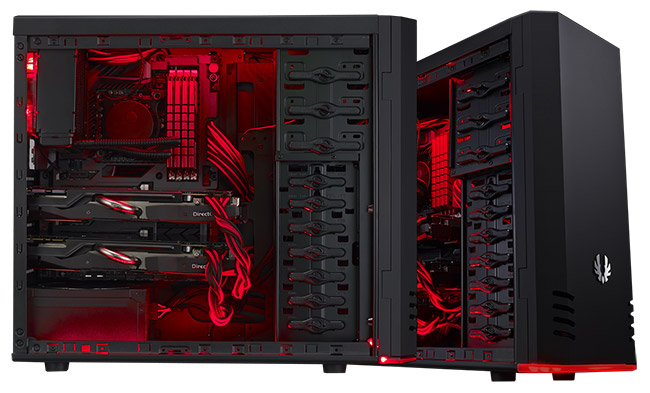 Although we opted for an affordable build, you can see from the promo shots on the BitFenix site just how easy it is to create a fully-loaded, custom build – complete with the integrated pretty lights.