Target Components’ Managing Director, Paul Cubbage, has had an amazing year. No mistake. Alongside banging in record revenues during a global financial crisis/flat market for technology, his team has also managed to secure a number of new deals that will, almost certainly, guarantee that the company breaks all of its records again in 2013. KitGuru hangs around the watercooler, hoping to target a sauce.

Over the past 5 years, Cooler Master has explored a number of different distribution models for the UK market. Along the way, it has tried focusing more on larger, direct reseller customers – as well as selling through major distributors who have a vast array of products.

Drawing on all of that experience, Cooler Masters UK Country Manager, Mingkei Wu, has decided that Target Components will add valuable energy, drive and focus into the smaller, independent resellers across the UK.

Over the summer, KitGuru reported that Target had posted over $30 million in revenue while managing to generate more than $1 million in profit. Those are some impressive numbers in the current economic climate. Given the popularity of Cooler Master’s chassis and power supplies in the UK – Target’s previous record revenue numbers are likely to tumble in 2013. So how does this benefit you, the enthusiast consumer?

Well, Target has several thousand smaller stores on its database. That would include shops in remote parts of the country – as well as bigger stores on the outskirts of major towns and cities. These stores may not normally stock Cooler Master, but that’s something that’s likely to change – which means (a) more chances to get hands-on with the latest kit and (b) more price competition. Both of these are normally a good thing for consumers.

KitGuru says: It’s good to see Cooler Master opening more opportunities for UK-based customers to see its products first hand. We applaud Mingkei Wu and his team for taking such a pro-active step toward opening up the market and expanding sales.We’ve been told to stand by for more announcements in this area, so keep ’em peeled. 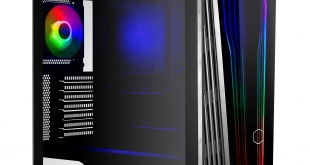