There’s a school of thought in design that says ‘In order to go forward, you must first look back’. Probably one of the more famous examples in recent times was the re-emergence of the roadster sports car. Some of the ideas in the BMW Z4 go back half a century, but the result is pleasing to the eye. Thermaltake is today revisiting one of its most popular chassis of the past. KitGuru wonders if it is a reincarnation of a past master or wine made from grapes that have hung too long on the vine.

It’s hard to see ‘Soprano’and not think back to Satriale’s Pork Store and the Bada Bing. The original Soprano chassis launched in the middle of the last decade and KitGuru maestro Zardon spent many hours analysing products like the Soprano VB1000 SWS.

The New Soprano has the wonderfully complex code name VO900M1N2N, which is a pity because the chassis itself is far smoother.

It’s 100% black, inside and out, with capacity for multiple full-length graphic cards.

According to CEO Kenny Lin, “We have included an invisible top-mounted HDD docking station and internal USB 3.0 ports for a refined data management along with plenty of space for up to four optic drive devices, a multi card reader, five additional drives and lots of space for an enthusiast’s cooling options”.

“Our spacious ATX design can house multiple graphic cards up to 315mm long and we have also included 4 rubber grommeted cable management holes and sound-dampening foam with the side panels”, he explained.

KitGuru says: We can’t help but wonder why Thermaltake does not carry on with designs like the original Level 10. This new Soprano chassis looks capable, but (on looks alone) it won’t be enough to stand out on a shop shelf with 30 other black chassis. We would seriously encourage Thermaltake to follow Tt eSports and come up with designs that shock and amaze, because even if they don’t sell huge amounts – they will stand out in the consumer’s mind – and that’s important. 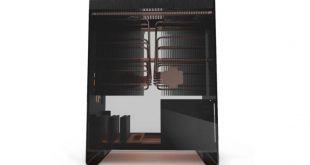 MonsterLabo showcases impressive passive cooling while gaming with ‘The Beast’