MSI has announced the introduction of four new models to its PC case series, the new additions include the MPG GUNGNIR 110 series with three different variants as well as a new MAG VAMPIRIC 100 case.

The MSI MPG GUNGNIR 110 family consist of three brand new models and a similar naming scheme to the recent MAG FORGE 100 series with a GUNGNIR 110R, 110M and 111M completing the line-up. MPG GUNGNIR 110 series is designed for performance systems and are packed with features to improve functionality and convenience.

All three of the MPG GUNGNIR 110 cases offer flexibility and integration with MSI’s established gaming ecosystems. A front-panel USB Type-C port can be easily connected to MSI motherboards with a USB Type-C header and a tempered glass side window perfectly showcases the expensive components inside the chassis.

Other features of the MSI MPG GUNGANIR 110 family include the capability of installing up to six systems fans or cooling radiators up to 360mm long, magnetic dust filters and a built-in RGB control switch and Insta-Light Loop. MSI has equipped the MPG GUNGNIR 110 series four ARGB fans in the 110R, three auto RGB fans and single system fan in the 110M and three standard RGB fans and a system fan comes pre-installed in the 111M. 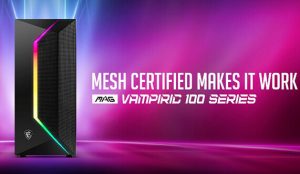 MSI has also added a refreshed version of its VAMPIRIC case to the list with a new VAMPIRIC 100 featuring a mesh front panel design for improved airflow. Thanks to a new front panel with a right-hand side made entirely out of mesh with a magnetic dust filter behind, the VAMPIRIC 100 should provide unobstructed airflow to the internal components.

Details of pricing and availability of these new MPG GUNGNIR 100 series and MAG VAMPIRIC 100 cases are yet to be disclosed by MSI.

KitGuru says: MSI seems to be pushing plenty of new cases out for 2020 after the success of the MAG Forge 100 series. What do you guys think of these new models from MSI?