RGB LED case fans are an essential part of any high-end gaming or enthusiast PC build these days. Manufacturers are constantly updating products all the time, introducing more LEDs into the designs to produce even brighter lighting, with more choice of lighting colour and pattern customisation.

Ever since RGB lighting in PC systems became a thing, Corsair has been one of the leading brands in colourful RGB lighting. Corsair fans especially, offer some of the best customisation options with a great eco-system. The company has launched a new range of RGB LED fans that provide spectacular lighting from any angle.

Corsair’s new line of iCUE QL RGB fans feature 4-pin PWM connectivity and are available in 120mm and 140mm sizes. The QL fans include quad light loops containing a total of 34 individually addressable RGB LEDs that create an incredible display of lighting, visible from either side. Kits including multiple fans will be provided with the Corsair iCUE Lighting Node Core RGB lighting controller, which is capable of controlling up to six fans.

The company claims that no other RGB fans come close to the brightness and vibrancy that the new QL series offers. With lighting loops on both sides of the QL RGB fans, the intricate, bright and detailed lighting effects impress from any angle. A semi-transparent fan blade allows the RGB lighting to shine through, regardless of fan orientation. A durable aluminium central hub complements the QL series fans premium aesthetics. 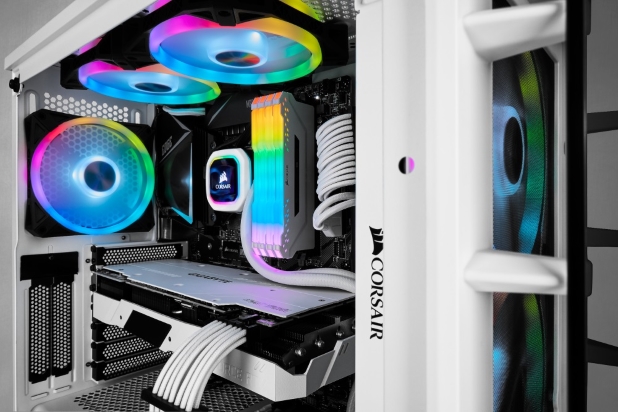 When connected to the Corsair iCUE Lighting Node Core, the QL series fans can be controlled by Corsair’s iCUE software. With six fans connected, a staggering 204 addressable LEDs can be customised using the iCUE software with hundreds of colour and pattern options. Corsair QL 120mm and 140mm fans spin up to 1500 RPM / 1250 RPM respectively and feature precise PWM control, Even at maximum RPM, the QL RGB fans keep noise levels low thanks to their integrated anti-vibration rubber dampers.

KitGuru says: With such a huge amount of RGB products available now, PC system builders are spoilt for choice. The new QL series from Corsair look like some of the prettiest RGB fans I have seen to date. What do you guys think to them? will you be adding some to your rigs soon?