If you own an EK D5 pump, you can now improve its hydraulic performance (up to 15%) by adding the newly released EK-Quantum Inertia D5 Body D-RGB tops. Featuring D-RGB LED lighting and a design that “seamlessly blends with the rest of the EK Quantum Line”, these new EK pump-tops are available in both plexiglass and acetal variants.

The RGB lighting of both variants is compatible with most RGB sync software on the market, including Asus Aura, ASRock Polychrome, Gigabyte RGB Fusion, and MSI Mystic Light. To do so, the 3-pin LED connector has to be hooked up to the +5V marking on the D-RGB header of the motherboard. 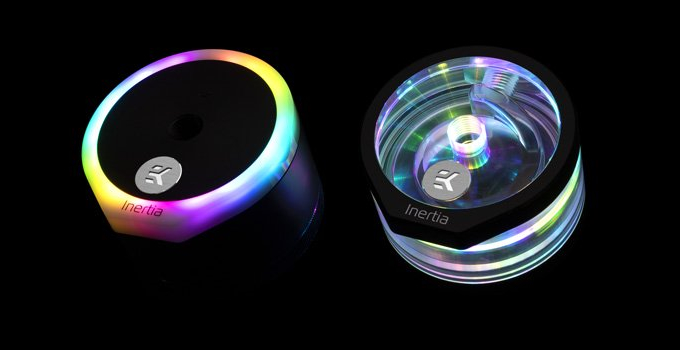 The fully rounded body of the Quantum Inertia D5 tops were designed to make installation easier, allowing them to be mounted “at any angle within 360 degrees of rotation”. When mounting these tops, you can choose between both horizontal and vertical positioning to make tube routing easier. Additionally, there's a rubber damper used to detach the pump body from the mounting clip, making it more stable and free of “vibration-induced noise”.

The EK-Quantum Inertia D5 Body D-RGB standalone tops are available now at EK webshop and at selected retailers. The acetal and plexiglass variants are both priced at €74.90. You can learn more about them HERE.

KitGuru says: Do you use a D5 pump on your custom liquid loop? Would you like to enhance it with a Quantum Inertia D5 pump-top?